The below email was circulated on March 14, 2011 to roughly 500 people who know or know of Leah Krier.  It is reproduced here because it is representative of an astonishing phenomenon that is readily observed by anyone who visits the Triangle Region of North Carolina for any length of time and interacts with general populace there . . . and that is that NO ONE TELLS THE TRUTH.  And sadly it seems those who are associated with Leah these days are over-the-top prevaricators, as evidenced in my exchange on Facebook (below) with Leah's friend, Leslie Crabtree.

It's rumored the Saturday Night Live "Pathological Liar" character developed by Jon Lovitz was inspired by his visits to the heartland of North Carolina.  And there is rock / pop band growing in popularity called Carolina Liar.  The guitarist and lead singer is from South Carolina, suggesting this lack of "truthiness" is pervasive throughout the Carolinas, and native South Carolinian Stephen Colbert has developed quite a following (the Colbert Nation) who feed off his sarcasm after catching prominent individuals in self-contradictions and lies.  Notwithstanding, this phenomenon in the Triangle region of North Carolina is really quite remarkable to behold and it would appear comical if so many lives weren't turned upside down by such a pervasive existence of bull-shit artists.


In the more than 60 false and disparaging articles about Spencer C. Young appearing in the local newspapers of the Raleigh-Durham-Chapel Hill area, a list of 25 BLATANT LIES that were repeated over-and-over have been compiled and refuted with the truth.  In fact, there is so much bull-shit contained in these articles, the numerous falsehoods are measured against a "Manure Meter" which measures how false a reported fact was on a scale of 1 to 10.  Click here for further details and note that the manure meter is reproduced below:

Here is the earlier referenced email and exchanged messages with Leslie Crabtree on Facebook:

This email addresses bold prevarications and misrepresentations from one of Leah's closest friends, Leslie Crabtree.  Our recent exchange on Facebook is reproduced below, where her lies are exposed . . . for as the saying goes: "Silence is fraud's best friend, word of mouth is fraud's worst enemy, so I'm passing the word on".

It also bears reminding you are receiving these emails for one reason only:  Leah filed a bogus paternity petition filed by (in my opinion) an incompetent or unethical attorney (click here to see my letter to Jane Isern of Brown Carpenter & Isern (in Great Bend, KS), articulating my rationale for such an assessment).  And since there is legitimate uncertainty concerning whether I am in fact Jackson's natural father and Leah has kidnapped Jackson for over a year, I indicate having three sons in point # 7 (below).

Circulating these emails is not something I wish to do, as I am in the midst of reclaiming ALL that was stolen in the worst instance of bank foreclosure fraud in U.S. history.   Notwithstanding, I must treat those who engage in activities disruptive to this pursuit (even if unwitting) as complicitors with fraud, racketeering, extortion, sabotage, corruption and the like . . . and of all people, Leah should know better.

Importantly, once her bogus petition is withdrawn, and Leah's disruptinve and criminal acts cease, these expositive emails will no longer need to be circulated.  To hasten this eventuality, please contact Leah and urge her to act accoringly.  She can be reached at 919-357-3575 (by phone or text message) and atblueskygirl2u@aol.com and leah.krier@airwis.com (presuming she remains employed after the investigation of her embezzlement of US Air beverage sales is completed). 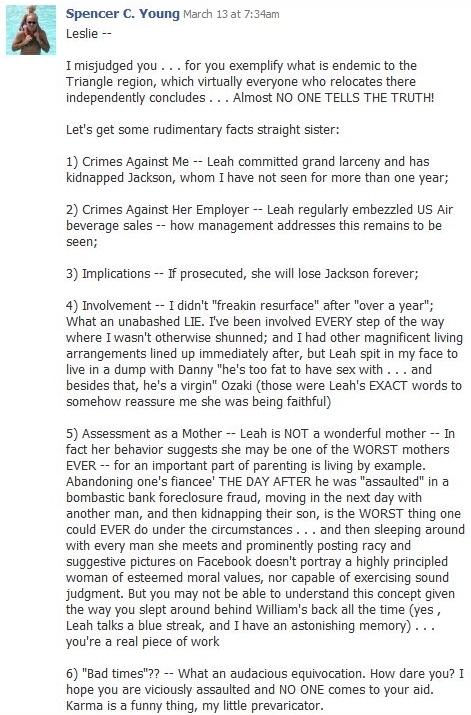 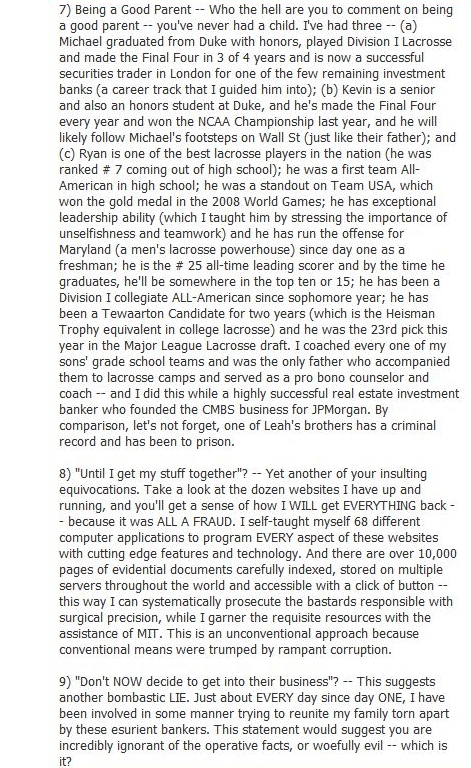 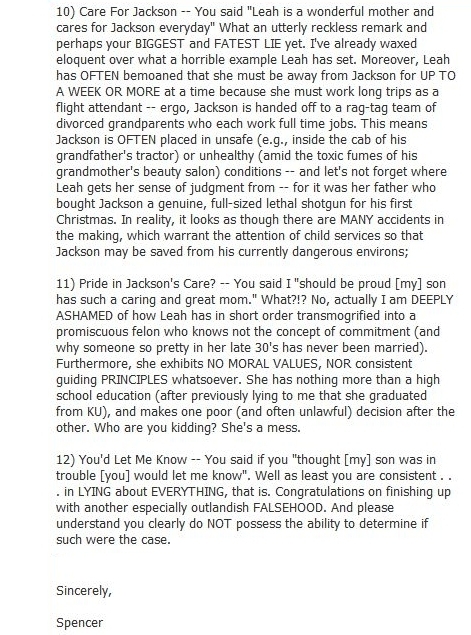 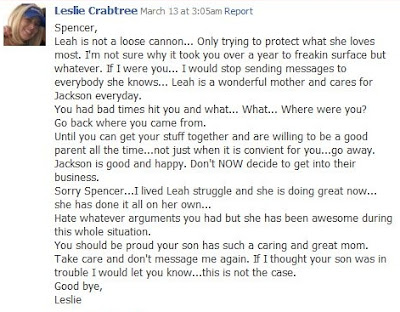 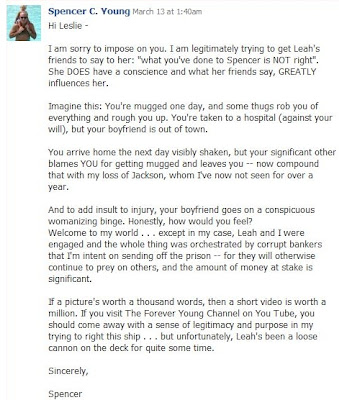 Posted by Spencer C Young at 6:05 AM No comments:

Prior to 2007, no attorney ever resigned from representing Mr. Young and his interests in any matter prior to its conclusion, a track record which spanned OVER TWO DECADES.
The parade of resignations that suddenly occurred in 2007 and thereafter were ALL orchestrated by by Kirkland & Ellis on behalf of Morgan Stanley pursuant to a series of tactics Kirkland & Ellis is notorious for employing in tandem with Morgan Stanley.
This manifestation became more pronounced when the fraudulent foreclosures by Wachovia and Paragon proceeded uncontested for NOT a single attorney in North Carolina would represent Mr. Young and when this was brought to the attention of the NC Bar Association, the NC Dept. of Justice and the NC Banking Commission among others, THERE WAS NO RESPONSE, and subsequent follow-up was met with creative forms of continued evasiveness . . . evidencing profound C-O-R-R-U-P-T-I-O-N, which resulted in the orchestrated destruction of Mr. Young's career and grand larceny theft.
Posted by Spencer C Young at 1:13 AM No comments:

FAQ - LAW # 1: Why did the courts always rule against Spencer C. Young?

Prior to 2007, NO court in ANY jurisdiction ruled against Spencer C. Young or ANY of his Corporate Entities, which is a track record spanning more than two decades of owning and managing commercial real estate investments, as well as in corporate finance and investment banking. . . and this is something few others can claim.
And ALL rulings thereafter were result of undue corrupt influence exercised in the MorganStanleyGate scandal. This was a manifestation of the ongoing cover-up engineered by Morgan Stanley and Kirkland & Ellis entailing: (1) obstruction of justice; (2) widespread corruption; (3) denial of due process; and (4) the effects of malicious smear campaigns in New York and North Carolina.
In summary court rulings began going against Mr. Young in 2007 because:
So the reason why Mr. Young's pristine 21-year track record of owning and managing commercial real estate without an adverse court decision suddenly reverted to ALL loses was ENTIRELY ORCHESTRATED BY FRAUD AND CORRUPTION . . . ALL of which stemmed from the MorganStanleyGate scandal, and the tandem of Morgan Stanley and Kirkland & Ellis have a long notorious history of obstructing justice and denying due process.
Posted by Spencer C Young at 1:03 AM No comments: