. . . was valued in excess of $200,000.  This outlandish grand larceny was carried out in FIVE episodes over a six-month period by Durham County Judge David Q. LaBarre and his girlfriend, Leah R. Krier (pictured below), the details of which are painstakingly articulated in a 30 page criminal indictment that was originally filed with the Durham Police Department. 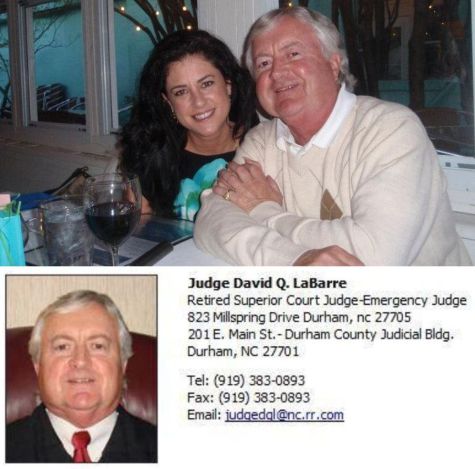 The thefts encompassed the following:


Pictures of the stolen property are reflected below. 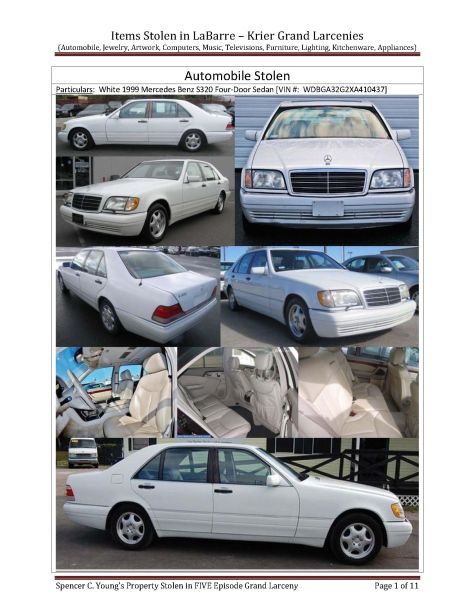 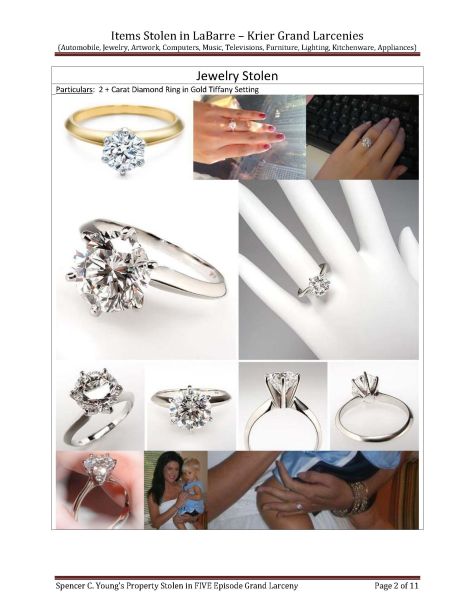 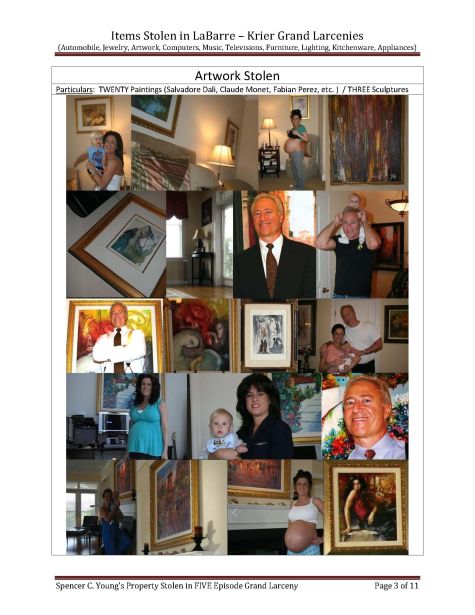 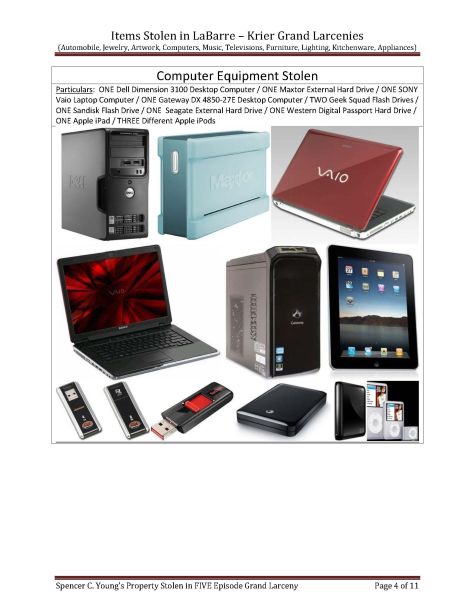 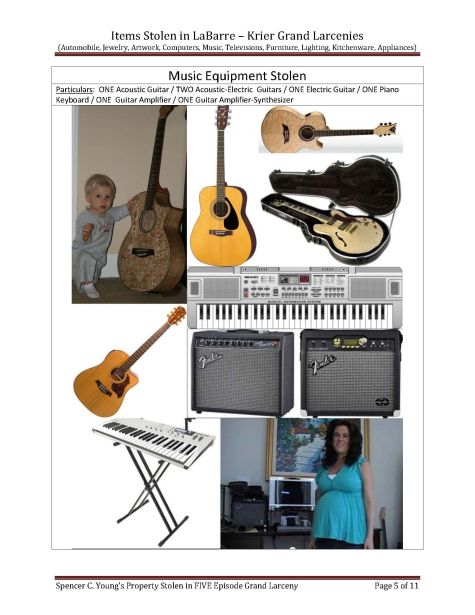 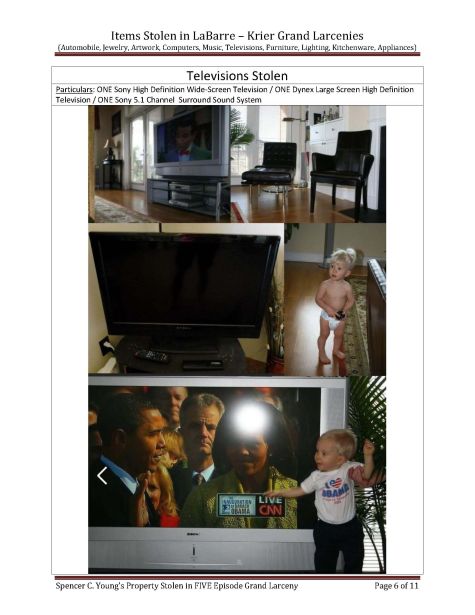 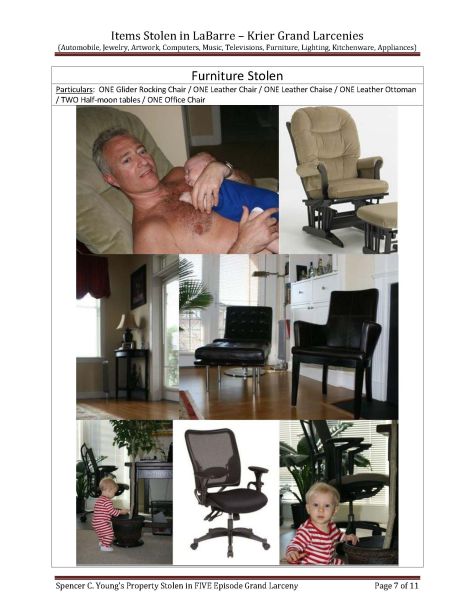 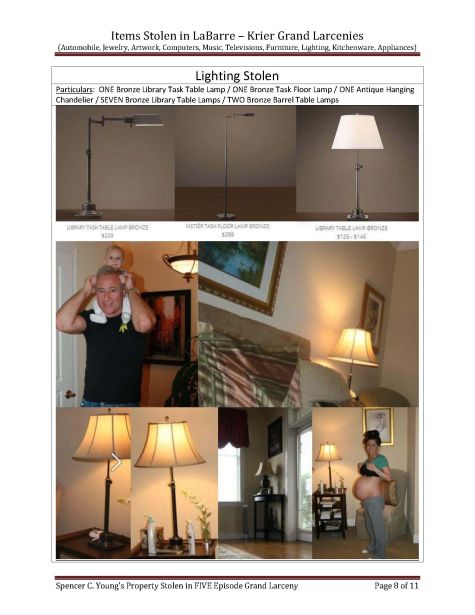 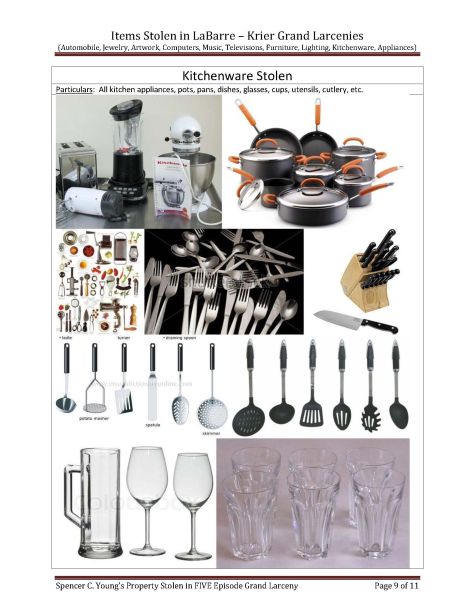 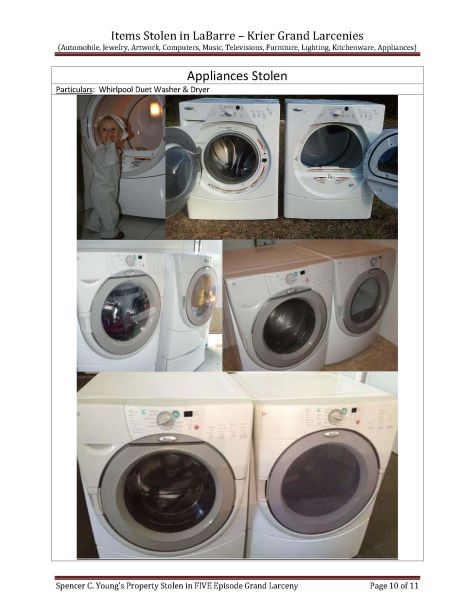 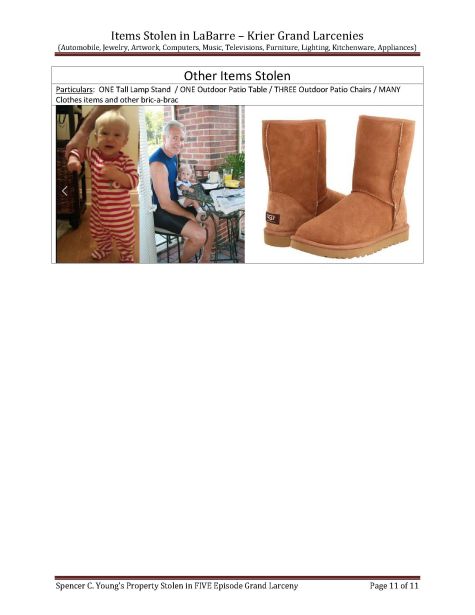 Posted by Spencer C Young at 11:46 PM No comments:

. . . which is "Black History Month" in the United States.


Who is Leon Stanback?
Leon Stanback is a 70-year-old African-American whose record as a now retired Durham County (North Carolina) Superior Court Judge, and current Durham District Attorney should be celebrated this month of February 2013, nationally recognized as Black History Month.  Instead, he has brought upon himself profound disgrace with ironically repulsive behavior worthy of making President Abraham Lincoln and Dr. Martin Luther King, Jr. turn in their graves.

Three's a Charm
In what seams to be a broken municipality, the last two Durham County District Attorneys (Mike Nifong and Tracey Cline) were removed from their positions in disgrace.  Moreover, the adage "three's a charm" comes to mind, as this same fate appears to await Mr. Stanback, who continues to abuse his vested prosecutorial authority in a deliberately complicit effort to COVER-UP the extensive FELONIES of a long-time friend and colleague, Judge David Q. LaBarre, and his girlfriend, Leah R. Krier (pictured below). 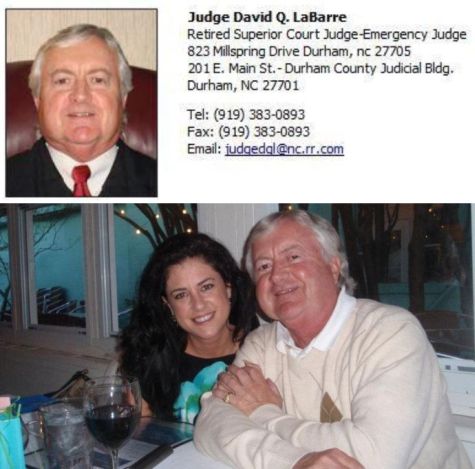 Behavior Worse Than Mike Nifong
Arguably, Mike Nifong had set the high bar for atrocious behavior by a District Attorney, for his role in the now notorious Duke Lacrosse Scandal.  However, as detailed in the Jan. 24, 2013 blog posting, Mr. Stanback's wrongdoings surpass those of Mr. Nifong in that he:

Abused his Prosecutorial Authority
in order to
Cover-Up the Felonies of Judge LaBarre
through the deliberate execution of an
Unlawful Arrest of an Innocent U.S. Citizen,
who was the actual
Felony Victim of Judge LaBarre
and thereby fulfilled a key role in a
Vicious Assault on American Civil Liberties.

Oh, The Irony Of It All
Now let's examine how ironic Mr. Stanback's behavior is, particularly in the context of this being "Black History Month", during which time two seminal events are often remembered:

The Emancipation Proclamation in 1862
And
The 13 Amendment to the U.S. Constitution in 1865

Had it not been for others who lived one-and-a-half centuries ago, who sought to secure and protect the freedom of ALL African-Americans, Mr. Stanback would have been born a slave and subjected to unimaginable suffering and indignation throughout his lifetime.  He would have otherwise NEVER reached his current age of 70, and he most certainly would have NEVER been appointed to the position of District Attorney in North Carolina !!

And how does Mr. Stanback demonstrate his appreciation for the protection of his right to freedom?  By taking away the freedom of an innocent U.S. citizen (Spencer C. Young) on FALSE charges in order to protect the FELONIES of a corrupt judge (David Q. LaBarre), who is a friend and colleague of his.  As a result of Stanback's reckless prosecutorial behavior, Mr. Young spent 127 days in maximum security jail with violent felons, while being UNLAWFULLY denied bail !!  And Stanback has stubbornly refused to drop the OBVIOUSLY BOGUS CHARGES. 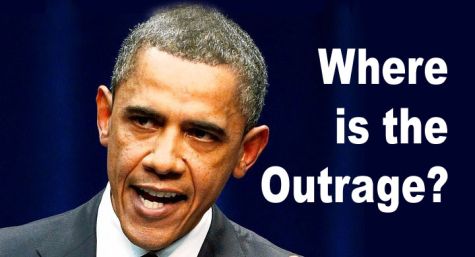 So What MUST Done?
To correct this travesty of justice . . .

. . .  AND THEN conduct a FULL investigation
into District Attorney Leon Stanback's
actions in this matter !!

Historical Context
For further historical context to the outrageous irony in District Attorney Leon Stanback's behavior, the Emancipation Proclamation (which declared slaves "forever free") and the 13th Amendment to the U.S. Constitution (which abolished slavery) are reproduced below, with the especially relevant sections highlighted.


Whereas on the 22nd day of September, A.D. 1862, a proclamation was issued by the President of the United States, containing, among other things, the following, to wit:


"That on the 1st day of January, A.D. 1863, all persons held as slaves within any State or designated part of a State the people whereof shall then be in rebellion against the United States shall be then, thenceforward, and forever free; and the executive government of the United States, including the military and naval authority thereof, will recognize and maintain the freedom of such persons and will do no act or acts to repress such persons, or any of them, in any efforts they may make for their actual freedom.

Arkansas, Texas, Louisiana (except the parishes of St. Bernard, Palquemines, Jefferson, St. John, St. Charles, St. James, Ascension, Assumption, Terrebone, Lafourche, St. Mary, St. Martin, and Orleans, including the city of New Orleans), Mississippi, Alabama, Florida, Georgia, South Carolina, North Carolina, and Virginia (except the forty-eight counties designated as West Virginia, and also the counties of Berkeley, Accomac, Morthhampton, Elizabeth City, York, Princess Anne, and Norfolk, including the cities of Norfolk and Portsmouth), and which excepted parts are for the present left precisely as if this proclamation were not issued.

And by virtue of the power and for the purpose aforesaid, I do order and declare that all persons held as slaves within said designated States and parts of States are, and henceforward shall be, free; and that the Executive Government of the United States, including the military and naval authorities thereof, will recognize and maintain the freedom of said persons.

And I hereby enjoin upon the people so declared to be free to abstain from all violence, unless in necessary self-defense; and I recommend to them that, in all cases when allowed, they labor faithfully for reasonable wages.

And I further declare and make known that such persons of suitable condition will be received into the armed service of the United States to garrison forts, positions, stations, and other places, and to man vessels of all sorts in said service.

And upon this act, sincerely believed to be an act of justice, warranted by the Constitution upon military necessity, I invoke the considerate judgment of mankind and the gracious favor of Almighty God.

In witness whereof, I have hereunto set my hand and caused the seal of the United States to be affixed.  Done at the city of Washington, this first day of January, in the year of our Lord one thousand eight hundred sixty three, and of the Independence of the United States of America the eighty seventh. 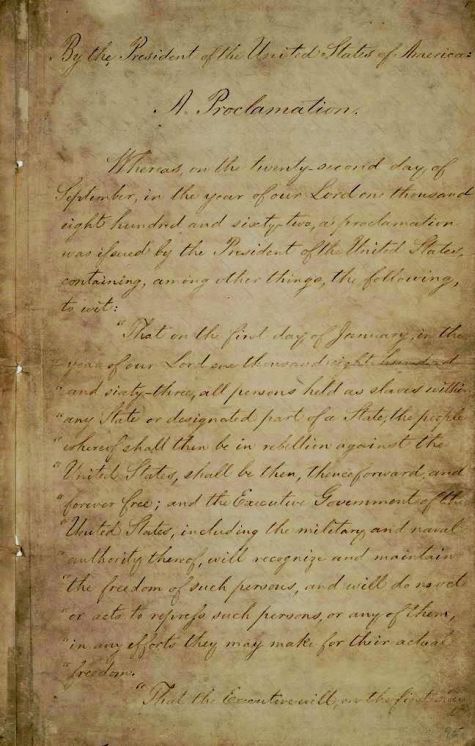 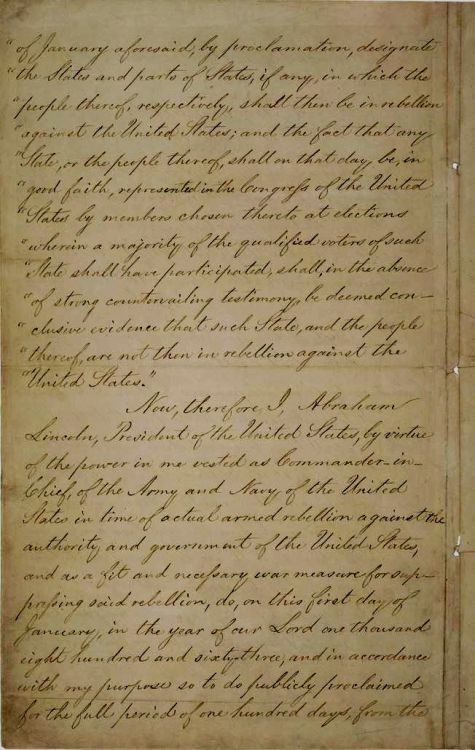 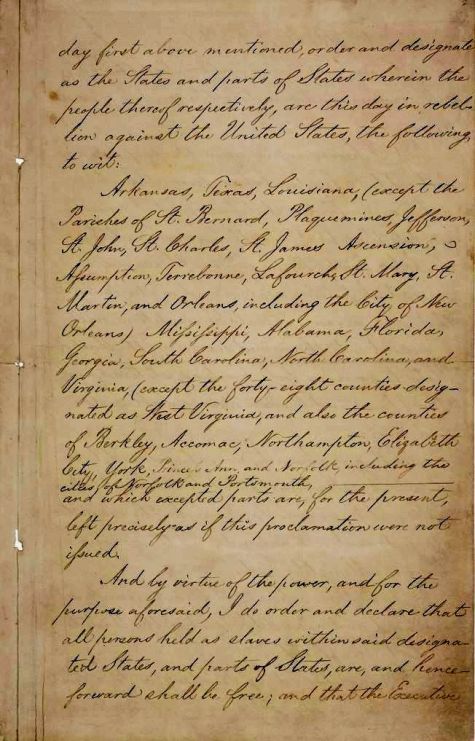 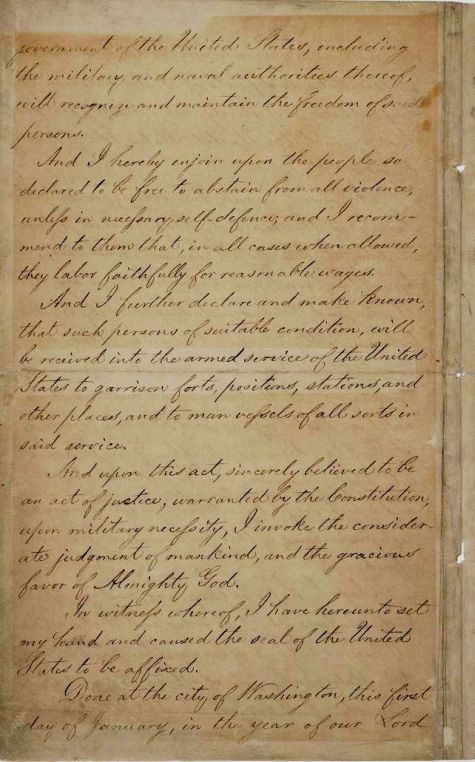 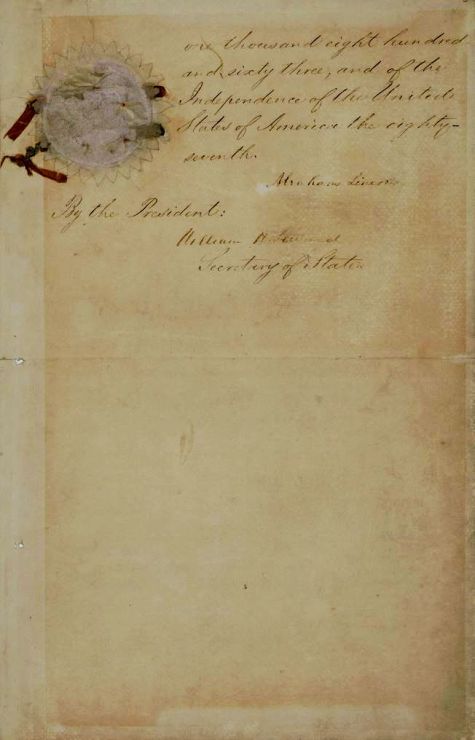 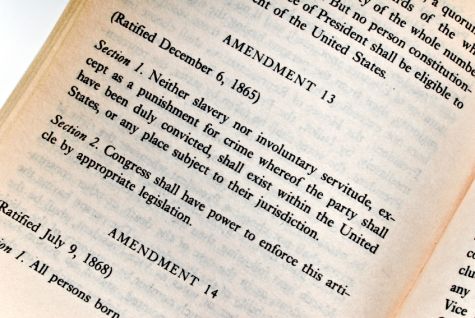 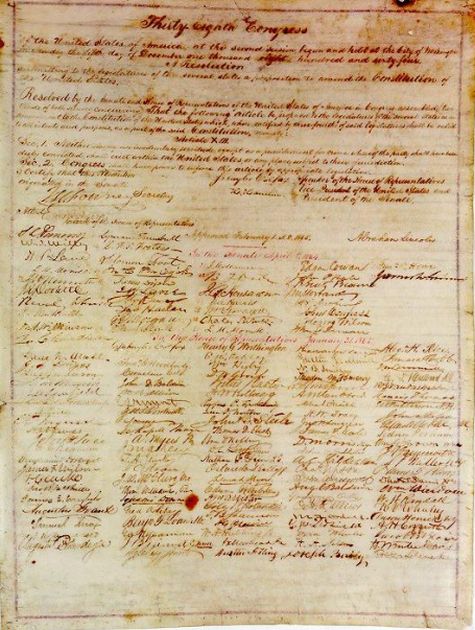 Posted by Spencer C Young at 6:29 PM No comments: