To Durham DA Leon Stanback: Please Demonstrate You Are NOT Involved In A Criminal COVER-UP . . .


. . . by taking THREE simple actions, as outined in an email sent to YOU on Jan. 22nd (reproduced at the bottom of this blog posting), and explained further in this posting with clarifying context.

The Role of District Attorney
Leon Stanback has been unresponsive to numerous requests to carry out the fundamental responsibilities of Durham County's (NC) acting District Attorney, namely: protecting citizens and their rights, victim advocacy (e.g., recovering stolen property) and by prosecuting those who break the law.

As evidenced herein, and throughout this blog, Mr. Stanback appears to be confused about his responsibilities because, as reflected herein, he has been DOING THE OPPOSITE, resulting in what can only be described as sheer "madness".

Notwithstanding, it is unlikely Mr. Stanback (a "retired" Superior Court Judge) could be flummoxed about his responsibilities.  Instead, the overwhelming facts suggest he has been KNOWINGLY fulfilling a pivotal role in a nefarious effort to COVER-UP the CRIMINAL ACTIVITIES of another "retired" Superior Court Judge, David Q. LaBarre, who just so happens to be a long-time friend and colleague of Mr. Stanback's.

Can you say "conflict of interest"?

Actions to End the Madness
This blog posting, as well as the widely distributed Jan. 22 Email (below), outlines how Mr. Stanback  can demonstrably refute, THROUGH HIS ACTIONS, the damning allegations of wrongdoing and "end the madness" by simply:


Flies in the Ointment
Under normal circumstances, such pedestrian tasks are standard operating procedure for a District Attorney . . . however, the "flies in the ointment" for Mr. Stanback are as follows:

In the context of this egregious abuse of judicial and prosecutorial authority by Durham County officials vested with the public's trust,  . . .

Potential Implications
Mr. Stanback's behavior in this matter (the "LaBarre Larceny Scandal") suggests he is either unaware, or in a state of denial about the gravity of the situation he faces -- for he now finds himself implicated in a level of CRIMINAL WRONGDOING and ABUSE OF AUTHORITY that makes predecessor DA Mike Nifong's misdeeds in the Duke Lacrosse Scandal look like minor traffic infractions.

Michael Young (Mr. Young's eldest son) was victimized by Mr. Nifong's recklessness as a member of the 2006 Duke Men's Lacrosse team as the entire team of innocent student-athletes were vilified in the media and subjected to frequent death threats, while their coach was wrongfully fired and their season was abruptly cancelled. Although Michael was one of the few players who did not attend the infamous party, rumors were swirling he was about to be formally charged -- that is until the attorney Mr. Young hired (Kyle Hall) had presented exculpatory evidence to Mr. Nifong BEFORE the formal charges were announced.

Michael escaped indictment, however his best friend, Collin Finnerty did NOT.


Additional Perspective
Michael Young and Collin Finnerty grew up together in Manhasset, New York, attended the same private high school (Chaminade) and later attended Duke University, in Durham, NC.  So when the FALSE charges of race-based hate crimes, kidnapping, assault and rape erupted on the national scene in 2006, Mr. Young was thus availed an insider's perspective to the trials and tribulations of the WRONGFULLY accused.

Mr. Young personally observed (and vicariously experienced as a loving parent) the debilitating effect the FALSE charges had on ALL members of the Duke Lacrosse Team, as well as the devastating impact the BOGUS indictment had on young Collin.  In fact, Collin became so disillusioned and repulsed by the horrific treatment he received at the hands of a RECKLESS Durham District Attorney (Mike Nifong), while being effectively ABANDONED by Duke University, he relocated to a different state (Maryland) and finished his undergraduate years at  Loyola University, where he served as Captain of its Division I Lacrosse team.

So Is This Deja Vu?

Durham County has clearly NOT learned from its profoundly embarrassing mistakes of six years ago, and the matter at hand is metaphorically likened to a bolt of mendacious lightning that has struck the same place (Durham, NC) and in the same manner (instigated by the outlandish LIES of a deluded woman).

At first blush, it would seem only the faces have changed in these remarkably linked scandals, as illustrated below:

And yet as horrific a chapter the Duke Lacrosse Scandal turned out to be, the LaBarre Larceny Scandal is actually FAR WORSE because of the nature of its "assault on American civil liberties", and because the Durham District Attorney that made it possible (Leon Stanback) has engaged in behaviors that take the reckless prosecution of FALSE charges to an entirely new level, as described in the next section.

Leon Stanback's reckless behavior in the LaBarre Larceny Scandal has been far worse than that demonstrated by Mike Nifong in the Duke Lacrosse Scandal because Mr. Stanback . . .

Vicious Assault on American Civil Liberties
In the Duke Lacrosse Scandal, three student-athletes were WRONGFULLY indicted and arrested on FALSE charges.  For purposes of this comparative analysis, it is important to keep in mind they spent no time in jail, as they were comfortably availed advanced notice, and were allowed to voluntarily surrender and immediately post bail, all of which were coordinated with their respective criminal defense attorneys.

By comparison, Spencer C. Young (who has NO CRIMINAL RECORD) was:

Is This Really Worth the Risk?

Mr. Stanback, please ask yourself whether the downside associated your behavior to date is really worth the risk, as the related consequences could exceed those of your predecessor, Mike Nifong (e.g., disgraced removal from office, disbarment, bankruptcy).  In so doing, I'm surmise you will consider how your wife, Michelle may also be impacted.

The Truth is this:  Your actions in the LaBarre Larceny Scandal substantially exceed the wrongdoings of Mr. Nifong in the Duke Lacrosse Scandal and evidence:
You are now being asked to ameliorate an outrageous travesty of justice from the LaBarre Larceny Scandal by carrying out THREE SIMPLE TASKS, which were outlined to YOU in the Jan. 22 email (reproduced below).  These TASKS coincide with your express responsibilities as District Attorney, and will affirm your oath to defend and uphold the U.S. Constitution.

And by TIMELY doing so, you will end this madness, and likely distance yourself (and your family) from the SIGNIFICANT downside you may otherwise experience.

As noted in the blog post titled: "Durham COVER-UP: Judge David Q. LaBarre And His Girlfriend, Leah R. Krier, are NOT Above The Law" you are AGAIN asked to undertake what should (under normal circumstances, devoid of corrupt influence) be THREE simple tasks in the discharge of your mandated responsibilities, namely:


Doing so will naturally distance yourself from the same disgraceful fate of your predecessor (Mike Nifong) had suffered, who also zealously prosecuted what he knew (or should have known) to be FALSE charges of a misguided young woman (Crystal Mangum) in the Duke Lacrosse Scandal.  In the matter at hand the misguided young woman is Mr. LaBarre's girlfriend, Leah R. Krier, who was directed by Mr. LaBarre to carry out numerous FELONIES and then provided FALSE assurances of immunity from prosecution.  In carrying out Task # 3 above, it is IMPORTANT you demonstrate by your actions that NO ONE IS ABOVE THE LAW, most especially Judges who abuse their judicial authority, as Mr. LaBarre did. 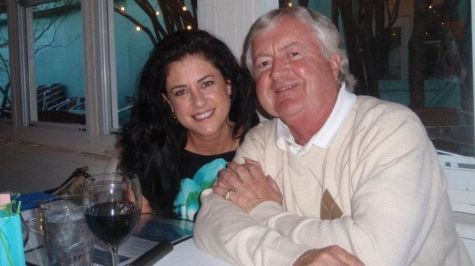 Judge LaBarre is pictured above with his girlfriend Leah R. Krier in December 2010, just a few months before they embarked on crime spree that spanned SIX months (from March 2011 to September 2011), involving Grand Larceny, Fraudulent Conversion & Auto Theft, and then followed in July 2012 with Obstruction of Justice, Criminal Invasion of Privacy, MORE Grand Larceny, and with regard to Mr. LaBarre, Abuse of Judicial Authority and a variety of other "color of law" (FBI parlance) violations. In arresting their robbery victim (i.e., Spencer C. Young) through the filing of FALSE CHARGES to COVER-UP their CRIMES, they also demonstrated profound level of EVIL.