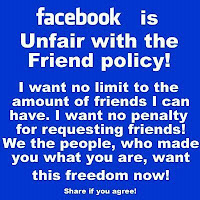 It is apparent many are unhappy with Facebook's policy on what are arbitrary, contradictory and patently absurd limitations placed on making friend requests, as evidenced by the blue wall-post (on right) that has been widely shared and circulated throughout Facebook.

Moreover, there is a growing incidence of emotional rants posted on-line over on this poorly thought-through policy -- see Figure 5 (at the bottom of this posting) for a representative "thread" of opinions on this.  [Warning:  Some of the comments are graphic and contain expletives.]


And How Does This Make You Feel? 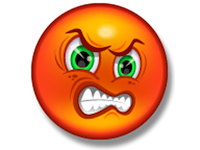 When subjected to this restriction, one cannot help but feel violated, insulted, angered, frustrated and/or otherwise victimized by something entirely amorphous that surreptitiously lurks in the unbeknownst crevices of cyber-space, where ill-conceived arbitrary "one-size-fits-all" parameters are being applied in an imbecilic manner.

Worse yet, the very premise of imposing such restrictions connotes profound hypocrisy, in that a "social networking" website is aggressively preventing its membership community from doing exactly that . . . social networking.  How's that for a mixed message?  It's sort of like . . . 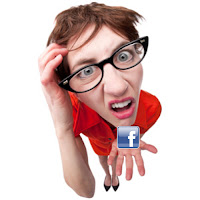 But what if these woefully contradictory rules are being applied in a capricious manner and the highly secretive parameters behind imposing such restrictions are NOT being applied equally to all?  Well, then you have the makings of a surreptitious Orwellian form of censorship, where a private sector Big Brother plays God, and whose unappealable decisions in effect proclaim:

"I forbid you from making new friends under my purview, despite my having lured you into doing so, by 'suggesting' people with whom you share as many as 50 mutual friends. And to punish you for allowing me to trick you, I will not allow you to contact any such others for a period of 2 days, 3 days, 5 days, 1 week, 2 weeks, one month, or whatever I feel like at the time, because after all . . . 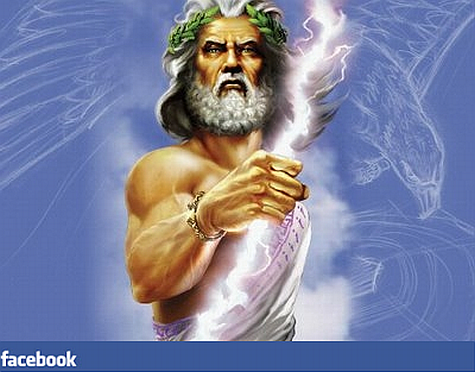 NOT Arbitrary & NOT Evenly Applied?

In the context of Spencer C. Young's personal experiences with this utter nonsense, and those described in the sampling of others below, it is OBVIOUS the restrictions are NOT being evenly applied, nor in a manner that remotely approaches rationality. Worse yet, Facebook's arcane rules MAY NOT be entirely arbitrary, and that's what is especially disturbing, particularly since they recently hopped into bed with Morgan Stanley when they tapped this insidious criminal financial institution and procreator of MorganStanleyGate, to lead its IPO.

If you read the thread of comments in Figure 5 below, you will note most infractions carried a penalty of being blocked from making friend requests for 2 days to 5 days, and one fellow bemoans being penalized a 4th time, and as a repeat offender, he was blocked for 7 Days.  Now contrast this with Mr. Young's experience . . .

Although Mr. Young had been an infrequent and lackluster participant in the Facebook community since joining in March of 2009, in the Fall of 2011, he decided to take social networking more seriously and get back in touch with friends and family.  As a result, his FB Friend count uneventfully ramped up from 60 to over 300 in just a few months.

In December 2011, he began beta-testing the roll-out of a mass mobilization model using Facebook and Twitter, which was an innovative social networking application developed by a post-doctoral research team at MIT.  This paradigm was designed to mobilize a large populace via social-networking to identify and engage the resources necessary to quickly solve complex problems, and resolving the MorganStanleyGate scandal represents an ideal application for this methodology. 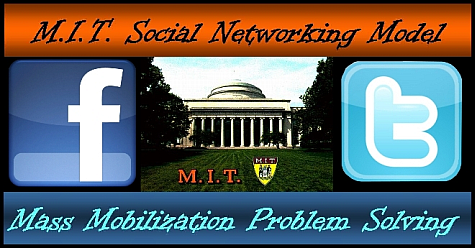 Shortly thereafter, Mr. Young received a warning that he would be blocked if he made friend requests to people he didn't know.  This made no sense to him, and he was suspicious of the timing for this spurious warning.  On December 15, 2011, he fired off a response that  may qualify as the most compelling and detailed response Facebook has EVER received on this topic; AND, he made no additional friend requests, pending receipt of a response.

Nearly two weeks passed, and NO RESPONSE was received; however, although Mark Zuckerberg is Jewish, he kindly sent Mr. Young a belated Christmas gift on Dec. 27 in the form of a pop-up message informing him he had been . . .  BLOCKED for 7 DAYS !! (see Figure 2).  "Thank you Mark, that was very thoughtful of you", Mr. Young mused sardonically.

After his one week "punishment" passed, Mr. Young gradually started contacting people whom he did in fact know, as well as some like-minded activists with an accompanying message, and naturally, Mr. Young began receiving many acceptances along the lines of those in Figure 3.  During this time, he was also beginning to solicit feedback on his adaptation of the MIT Mobilization Model.  But once again he was blocked, and this time for 14 days !! (Figure 4).

One doesn't need a rocket-science degree from MIT to know that SOMETHING IS ROTTEN IN THE STATE OF DENMARK, and the timing behind these confounding actions by Facebook is also highly suspicious . . . particularly in the context of Facebook's newly announced relationship with Morgan Stanley.

Mr. Young has no interest in emulating "Mighty Casey at the Bat" as it relates to this matter, and he respectfully requests that Facebook ELIMINATE its needlessly restrictive friend request policy altogether. 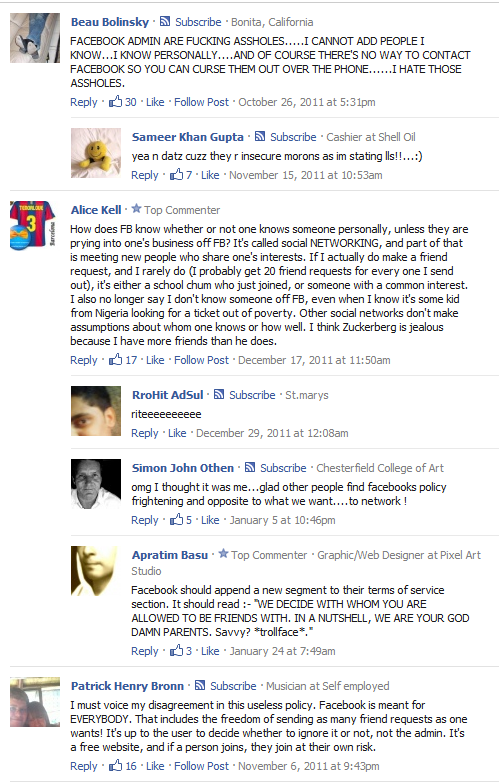 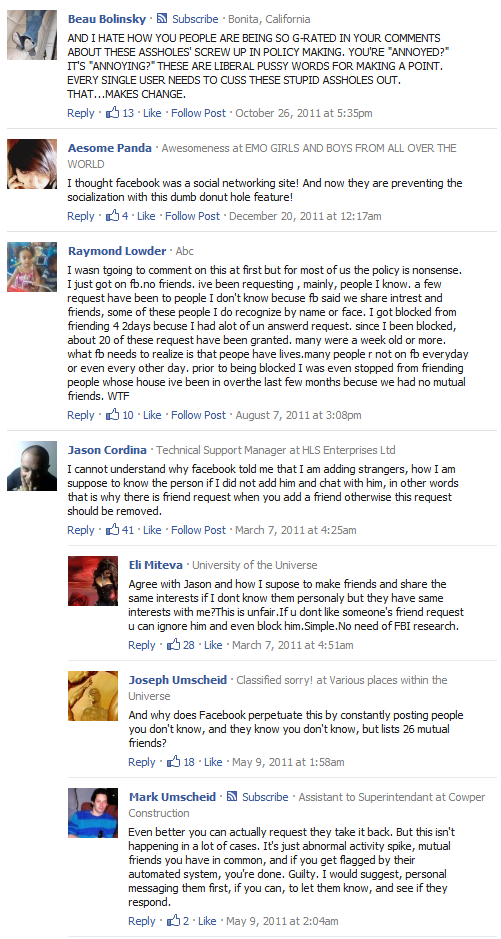 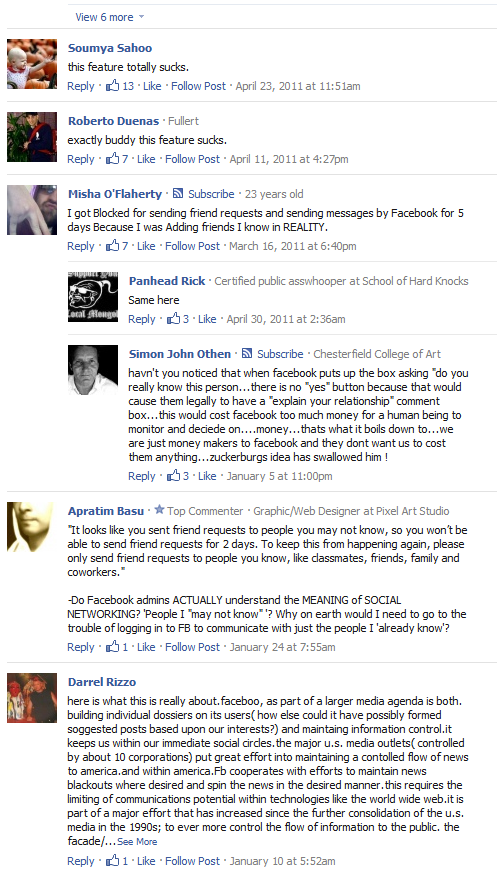 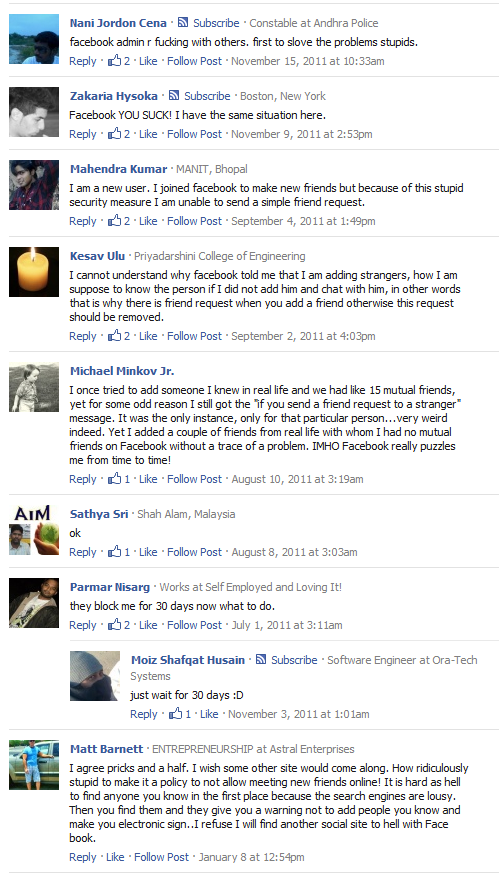 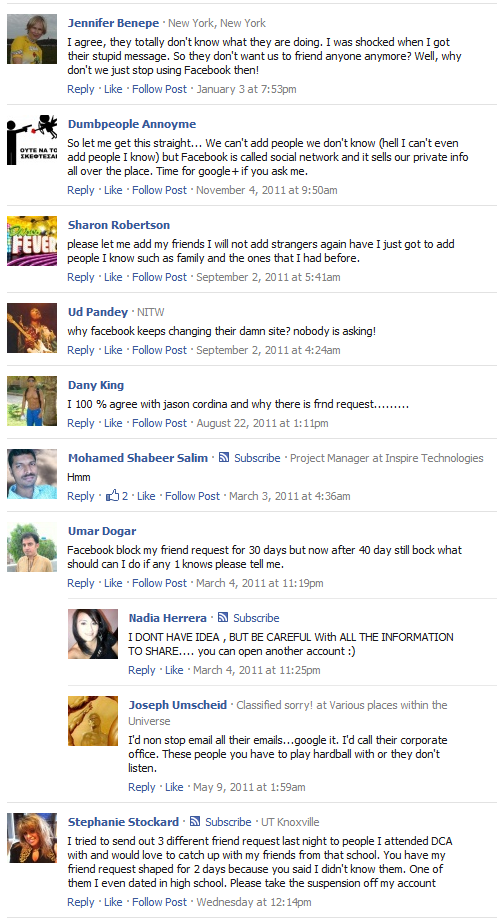 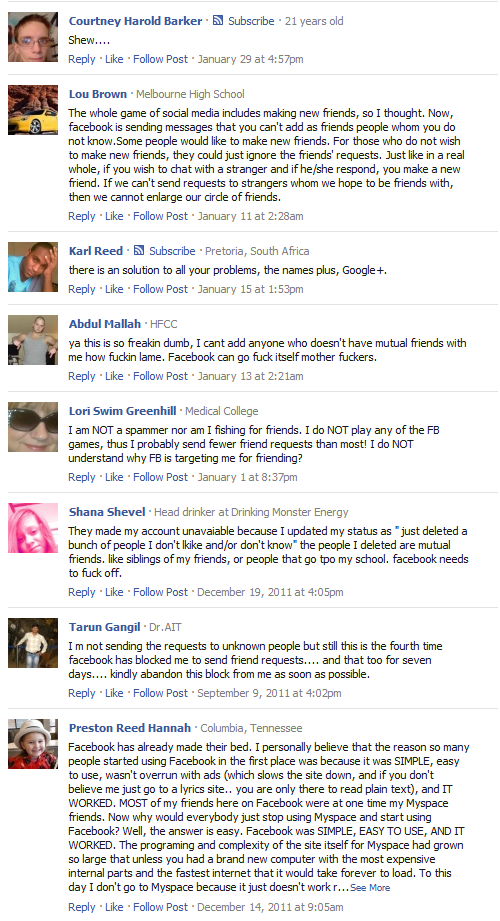 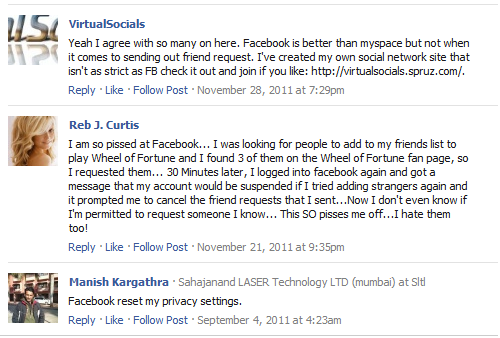 Posted by Spencer C Young at 12:33 AM No comments: