Nearly two-and-one-half years after first requested, Lincoln Financial finally cancelled the $1.5 million variable whole life insurance policy on Spencer C. Young's life, as evidenced below, but not until he had jumped through through a series of fraud-laden hoops in an elaborate cover-up effort to a diabolical plan. 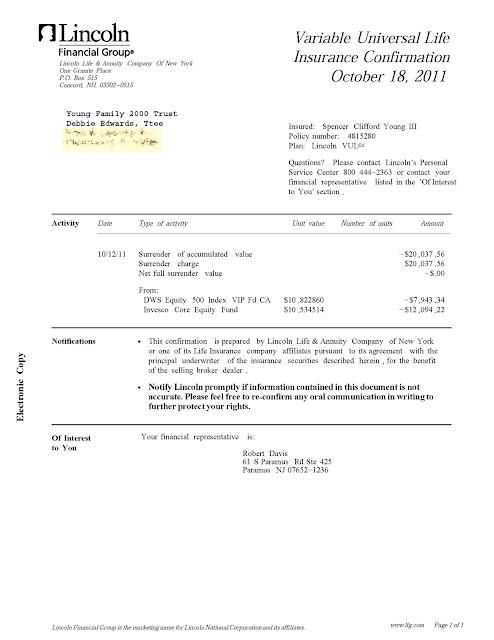 Posted by Spencer C Young at 11:14 PM No comments:

Spencer C. Young had to contact every Board Member and Senior Executive of Lincoln Financial Group to finally get information released on HIS life insurance policy, which HE established and which HE copiously structured, and HE had requested in writing on:
. . . and yet again in writing on October 12, 2011, along with numerous phone calls throughout the nearly 2 1/2 year period (891 days to be exact) in which Lincoln Life filibustered a cooperative response.

So what changed?  In a word . . . MorganStanleyGate.

How It Was Supposed To Be
In 2000, Spencer C. Young prudently arranged financial protection for his wife (Maria Young) and three sons (Michael, Kevin & Ryan Young) to preserve their standard of living and ensure his son's college educations in the event of his untimely passing.  He established a $1.5 million variable whole life insurance policy using a REVOCABLE trust structure, with HIM serving as its SOLE trustee during his lifetime.  Upon his passing, his wife would serve as co-trustee, along with Morgan Stanley, with all financial and investment decisions to be decided upon unanimously -- at the time, Mr. Young was an Executive Director at Morgan Stanley.

Mr. Young set up the life policy in a trust format with a prominent investment firm serving as co-trustee upon his passing because his wife, Maria had no financial background whatsoever.  However, during his lifetime, he would fulfill the role as SOLE trustee, thereby enabling him to have complete flexibility and autonomous control over the policy, and all investment and distribution decisions over the trust because of his extensive financial career and educational background.

Unfortunately, as a result of the unrelenting and often overwhelming stress brought about by  MorganStanleyGate, which began in November 2002, Mr. Young's marriage of 24 years ended in January 2008.

How The Fraud Was Perpetrated
Mr. Young first became aware something was amiss when he made a routine inquiry about the policy in May 2009, and was oddly denied access to information about his life insurance policy by Lincoln representatives.  When Mr. Young asked why, he was told information about the policy could only be shared with the Trustee (note:  Mr. Young had personally structured the Trust so that HE was the Trustee).

Here's how the conversation then proceeded, and note this conversation is representative of what Mr. Young has often encountered when confronting one of the many elements of  fraud and corruption in the MorganStanleyGate scandal.  And if this wasn't such a serious matter, it would be hilarious, for the failure to communicate bears some similarity to the famous Abbott & Costello "Who's on first?" routine (access video below); however, in Mr. Young's situation, it's not that he didn't understand . . . it's just that Lincoln flat out refused to provide information on the policy even though it was taken out by and paid for by Mr. Young !  And it was only through numerous calls to many different Lincoln representatives that he learned the policy had not lapsed, despite making no premium payments since 2003.

Conversation after Spencer C. Young was told by a Lincoln representative that information on HIS life insurance policy could only be shared with the Trustee of "The Young Family 2000 Trust":

And it wasn't until Mr. Young finally received a copy of the operative trust agreement over a year later (on June 10, 2010) from Philip Michaels of Fulbright & Jaworski (a law firm with long established ties to Morgan Stanley) that he realized the document had been fraudulently modified, as follows:

The Effect of These Fraudulent Changes to Trust Documents

These unauthorized changes to the trust documents also featured forged signatures of Mr. Young, and effectively:


Life Insurance Policy Summary
Below is a summary of the insurance policy information Mr. Young gleaned from the documents that were finally provided by Lincoln, which took 891 days (or roughly 2 1/2 years) to finally receive. 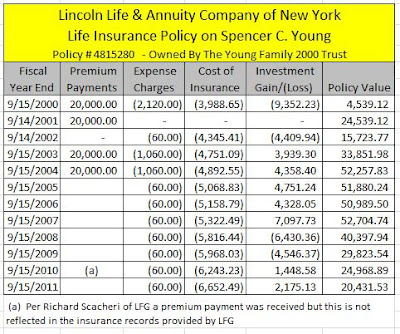 The excerpt below means if the policy value (amounts reflected above in the last column) ever dips below zero, the policy will lapse and ALL life insurance coverage will be cancelled

In light of the relatively low policy value, recent declines in policy value in 2008 and 2009, and the large declines in the two months preceding the remittance of the mysteriously missing insurance premium in early June 2010 (see below) it would be prudent to make a premium payment if someone was planning to collect on this policy in a year to mitigate the risk that a market decline would cause an inadvertent cancellation of this $1.5 million policy. 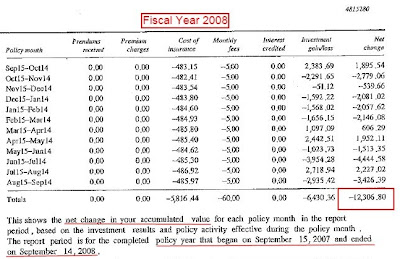 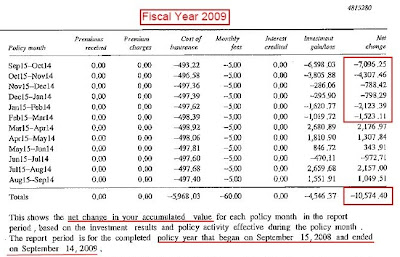 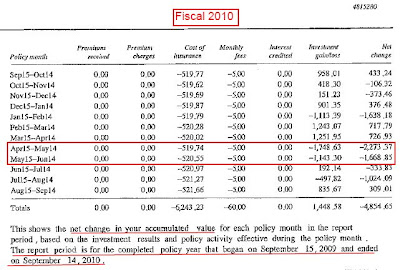 Missing Premium Payment
Reflected below is the schedule of premium payments made on the subject life insurance policy, which is conspicuously missing the premium made by an unspecified source in Q2 of 2010, as per Richard Scacheri of Lincoln on Jun. 14, 2010 and later confirmed by a woman at Lincoln who would only identify herself as "Heather". 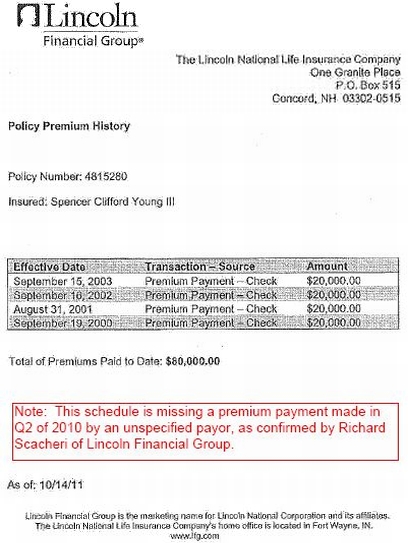 Conclusion
Although Lincoln representatives had earlier indicated a "large premium payment" was received in Q2 2010, this payment is mysteriously missing from the life insurance policy records released by Lincoln Life Ins. Co., after a two-and-a-half year delay.  Understanding WHO the payor was would likely pave the way toward a swift ensuing resolution of the MorganStanleyGate scandal.
Posted by Spencer C Young at 10:51 PM No comments: