On April 22 this year, a blog entry was made announcing, among other things, explosive growth in the number of "hits" to Spencer Young's nine content websites (this specifically excluded hits to his three feeder websites at Facebook, Twitter and Linked In).  The April month-to-date results at that point indicated a projected number of hits for the month of April of 185,000, which equated to an annualized hit rate of 2.2 million.

This jump in website hits followed a slight decline in the month of March 2011, which was attributable to Mr. Young's attention being diverted to the nonsensical legal antics (concerning custody and child support) of his once-fiancee' Leah Krier, and unethical attorney, Jane Isern, as well as the extensive corruption noted in the Durham Police Department.

Remarkably, Ms. Krier remains oblivious to having been duped and manipulated into turning against Mr. Young, and has since had a nervous breakdown and has engaged in a life without morals, and has now committed felony crimes.  This is consistent with the long practiced "divided & conquer" strategy in the cover-up of the MorganStanleyGate scandal employed by Morgan Stanley and Kirkland & Ellis.

The explosive growth in April commenced at the beginning of the month and continued to steadily increase across all nine content websites, such that the actual number of hits came in at 242,292, equating to an annual hit rate of 2.9 million.  This was an increase of 81% over the prior month.

However, an odd phenomenon was immediately noticed on May 1, and has been continuing.  As noted in the below chart, the month of May declined 36% from the prior month, and June is continuing this trend and is shaping up to be one-third of what April's website hits were.  How can this be, and who is responsible?

We are running the forensics, but who do you think? 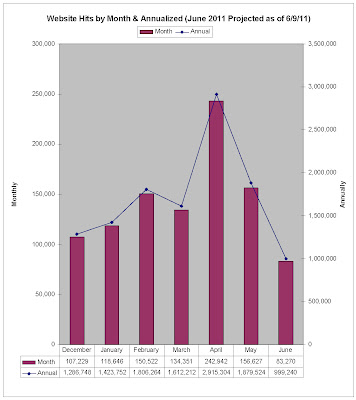 Posted by Spencer C Young at 12:12 PM No comments:

An OBVIOUS Example of Corruption in the U.S. Judicial System

Ms. Green –
Your response is insulting on many levels, and suggests an abandonment of integrity within the judicial system by the state of , and perhaps criminal collusion on your part.  Without any question or reservation, Judge Svaty MUST be removed from the "bench" and disbarred.

Reasons to Extricate and Disbar Judge Svaty
If you bothered to read my submission, you’d realize Judge Svaty violated ALL FOUR Canons.  In fact, his actions are so egregious, they warrant his disbarment, for he represents an outright menace to society, as outlined in the points that follow.

Demand for Investigation
Based on the aforesaid, the Commission has FULL and COMPLETE jurisdiction and I DEMAND FULL INVESTIGATION into Judge Svaty’s ATROCITIES!!!  And don’t insult me by suggesting I appeal this outright ABOMINATION . . . for you very well know the deadline to appeal this 100% FRAUDULENT DECISION  expired TWO DAYS AGO.
In order to provide proper context for the wide public, law enforcement and media distribution of this instance of blatant judicial corruption is receiving, I have:
Ø      Reproduced our email correspondence (see below);
Ø      Provided public access for complaint filed against Judge Svaty – click here
Ø      Provided public access for complaint filed against Jane Isern – click here
Ø      Posted this communique on-line, which can be accessed by clicking here.

Planned Assassination (Certainly of Character and Possibly of Person)
The aforesaid corrupt actions are ALL linked to the MorganStanleyGate scandal, and are intended to undermine the credibility of the now massive claims by attempting to depict me as “deadbeat father”, and eventually silence me.  Judge Svaty was directed to aggressively issue an entirely bogus arrest order in the near future, and wayward deputies would say I “resisted arrest”, shoot me dead in their own “self-defense”, and then plant a gun on me.  Click here for some other attempts made on my life.
Judge Svaty’s fraudulent arrest order would be deemed “contempt” and predicated on violating some baseless provision in a bogus ex parte TRO I learned about in a Barton County Court ROA but was never provided a copy.  Alternatively, the arrest order could be based upon non-payment of Judge Svaty’s meritless child support, which is explained further below.

Meritless Child Support
Be advised, this entire sequence of events has been a BLATANTLY ORCHESTRATED FRAUD, for which Judge Svaty has played a prominent role, and serves as preamble to the above-described planned assassination.  Importantly, on May 9, 2011, Judge Svaty directed monthly payments of $373 to commence and be made to the “” starting (eight days earlier) on May 1 – ergo, as of the date of this letter, I would be considered “delinquent”.
Such directed payments are null and void because:
Ø      The Paternity Obligation has not been Established as the Reckless Mother has refused to submit buccal samples for DNA testing;
Ø      Reckless Mother has been prepaid $34,000 -- In the event paternity is in fact established, this represents the prepayment of conditional child support for the next 7 ½  years
Ø      Reckless Mother has been prepaid another $20,000 – This represents a $20,000 loan to pay down her high interest credit card debt which has has not repaid.  Excluding statutory interest, this would mean to she has been prepaid conditional child support for an additional  4 ½ years
Ø      Reckless Mother has Engaged in Grand Larceny Theft of at least another $75,000 – this covers three separate events where she has stolen such things as a Mercedes Benz S-320, valuable paintings, high end electronic equipment, household appliances, furniture, etc.  In the event criminal charges are dropped, and the fair market value of the items stolen by the Reckless Mother are conditionally deemed prepaid conditional child support, this would take such an obligation (should it in fact exist) well past the age for which child support would apply
Ø      Income Implicit in Child Support calculation is a FRAUD – The income used to calculate child support does NOT currently exist, as I have been unlawfully denied a livelihood in the MorganStanleyGate scandal.  One cannot pay what one does not have, and there is no such thing as a “debtor’s prison” in – but that is what Judge Svaty’s planned actions would suggest.
Accordingly, even if the paternity tests were to indicate I am the natural father of the minor child (now 3 years old), there are NO conditions where I would have any child support obligation whatsoever.
Judge Svaty is reprehensible and dangerous – he MUST be REMOVED AS A JUDGE and DISBARRED, and I will do whatever is necessary to ensure this manifestation . . . for the public MUST be protected from this MONSTER.

This Commission does not have jurisdiction over legal and appealable matters.  Appeals can be taken from a decision of the district court to the Court of Appeals.  You have not otherwise provided any information which suggests a violation of the judicial code.

I am sorry we are unable to assist you in that regard.

The Commission on Judicial Qualifications considers and investigates complaints of alleged unethical conduct of state court judges under the Code of Judicial Conduct.  The powers of the Commission are not the same as those of an appellate court. The Commission does not consider legal issues or matters which involve the judicial discretion of a judge in deciding a case. Those decisions must be appealed to a higher court if errors are thought to have occurred. This Commission has no jurisdiction regarding district court jurisdiction, child custody, or child support.

I am sorry we are unable to assist you.

Posted by Spencer C Young at 9:02 AM No comments: