Why Was Spencer C. Young Arrested on FABRICATED Charges? . . .

Posted by Spencer C Young at 3:58 PM No comments:

The below transmittal was emailed January 8, 2013 to Janet J. Lennon, the FOURTH public defender assigned to defend Spencer C. Young against FALSE charges to cover up the criminal wrongdoings of corrupt Durham County Judge David Q. Labarre and Leah R. Krier, with whom he is romantically involved.  The failures of the three prior public defenders John ("Randy") Griffin, Kimberly Lott and Brian Aus are well documented through this web-log, the details of which are accessible via hyperlink in the body of the transmittal (below).
Although Ms. Lennon was purportedly working on Mr. Young's case for a week, she NEVER contacted him, NEVER returned his phone calls, NEVER responded to his emails -- in fact, it appears Janet J. Lennon may not even exist !!

As noted below, many others in the News Media and in Law Enforcement were copied -- for the efforts to cover up the Crimes of Judge LaBarre are becoming more outlandish and desperate.


Note to those copied herein:  This transmittal, including its hyper-links, reveals what is now an OBVIOUS and MASSIVE scandal, as the cover-up efforts are patently ABSURD . . . in fact, I’m not sure the person to whom it is addressed (Janet J. Lennon) actually exists.

For reasons articulated in the attached letter dated 1/5/13, I DEMAND your resignation in representing me as a public defender in the BOGUS charges, which should have been dropped long ago.  It is inexcusable that you NEVER bothered to contact me:

In my opinion, your atrocious behavior is deliberate and coincides with the creative means of stonewalling employed by your predecessors:


. . . the intent of which is to do NOTHING in my defense, and thereby facilitate a kangaroo-court prosecution and thereby COVER-UP the criminal actions of Durham County Judge David Q. LaBarre (also attached).  The efforts to prosecute me for charges made up out of thin air are ALSO intended to COVER-UP “the worst bank foreclosure fraud in US history”, and the astonishing number of criminal activities sponsored by Morgan Stanley with the assistance of Kirkland & Ellis in the now epic scandal known as “MorganStanleyGate”.

And what makes this instance of CRIMINAL COVER-UP so obvious is that the detailed 30-page criminal indictment against Judge LaBarre and others was never prosecuted, and that I was arrested by a SWAT team of US Marshals THE DAY AFTER the complaint was filed against LaBarre, and then UNLAWFULLY incarcerated with violent felons for 127 days while being DENIED bail.  This is an outrageous assault on the US Constitution, and MUST be exposed.

The below was emailed to Lawrence Campbell and Antoinette Hilliard of the Public Defender's Office of Durham County requesting the DISMISSAL of Mr. Young's FOURTH assigned Public Defender (Janet J. Lennon), the absurdity of which is beyond the pale.
Ms. Lennon (who may not in fact exist) was assigned to defend Spencer C. Young against the 100% FALSE charges, which were initiated by the woefully corrupt Judge David Q. LaBarre and Leah R. Krier, who have been romantically involved with each other since late 2010 (pictured below).   And what makes this especially reprehensible and outright EVIL is that this FRAUD was perpetrated to cover up their own FELONIES.
______________________

In America’s national pastime, when at bat, you get three strikes and you’re out.  Yet metaphorically, your assigning Janet J. Lennon to defend me against the FALSE charges that should have been DISMISSED long ago now represents “strike four”!!


Prior Failures And in the context of three prior “whiffs”, this situation is NOT a coincidence, but rather part of efforts to cover up the criminal wrongdoings of an exceptionally corrupt Durham County Judge David Q. LaBarre (click here for details).  As you know, the three prior “strikes” were:
(Click here for a listing of the confounding behaviors of Brian Aus & Kimberly Lott.)

Strike Four
After being notified of Ms. Lennon’s appointment via email on Jan. 2, 2013, I gave her an opportunity to call before placing a call into her at the end of the day.  She also did not return my call on Jan. 3 & 4.  In the meantime, I researched Ms. Lennon’s background, and had to employ the use of over 20 separate Internet search engines, because my searches resulted in remarkably little substantive information, as though she really hasn’t existed much during her 58 years of life.
Notwithstanding, from that which I was able to glean, it is clear Janet J. Lennon is unskilled, ill-suited and not competent to fulfill the role of criminal defense attorney in defending me against entirely FALSE charges, which are the byproduct of the profound level of judicial, legal and law enforcement corruption.  She is however, an ideal choice to facilitate the FRAUDULENT prosecution of an INNOCENT VICTIM of GRAND LARCENY to cover-up the CRIMES of Judge LaBarre.  This is because she: (1) thoroughly lacks criminal defense experience (2) has effectively covered up any information about her; and (3) has an extensive background as senior legal advisor within the New York Police Department during a time when corruption was rampant (refer to the section below titled “Fox Guarding The Hen House”).
What’s Really Going On
As you know, BOGUS charges were brought against me IMMEDIATELY AFTER I exposed the criminal wrongdoings of Durham County Judge David Q LaBarre, and my UNLAWFUL arrest in Florida by a SWAT team of U.S. Marshals THE DAY AFTER I filed the detailed criminal indictment of this corrupt judge is NOT a coincidence.  And my being UNLAWFULLY held without bail for 127 days, placed in maximum security jail with the most violent felons, and then regularly subjected to psychological torture in solitary confinement is INEXCUSABLE.  Moreover, the ensuing ransacking of my Florida residence and WRONGFUL SEIZURE of all of my computer equipment was a further assault on my rights and desperate attempt to suppress the damning evidence against Judge LaBarre and others.

What’s really going on is this . . .  An innocent law abiding citizen with no criminal record who was victimized in the theft of roughly $200,000 of his personal belongings, which was masterminded by a judge as a sophisticated form of payment for prostitution services, which is revealed in the accompanying Exhibit 1.   So the real perversion is really quite simple:
The VICTIM of a THEFT is being prosecuted
instead of  the CRIMINAL THIEVES responsible 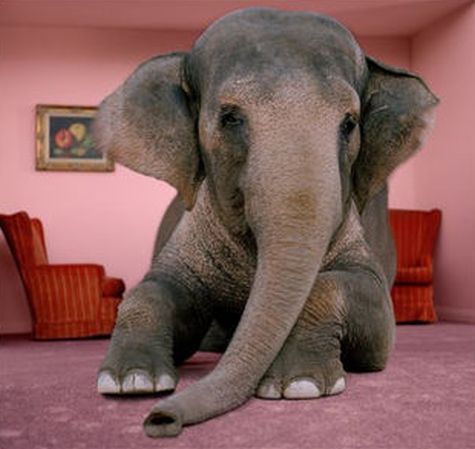 The Elephant In The Room
So with regard to the criminal charges filed against Judge LaBarre and his many accomplices on July 2, 2012, the logical question is this:

“Why has this still not been prosecuted?”

Well, I’ll tell you why. . . to COVER UP: (1) Judge LaBarre’s criminal activities; (2) the Durham Police Department’s involvement; (3) “the worst bank foreclosure fraud in U.S. history”, a distinction readily verified by internet search and (4) the many other elements of the underlying scandal that has instigated ALL of these nightmares and so much more – to wit, MorganStanleyGate. 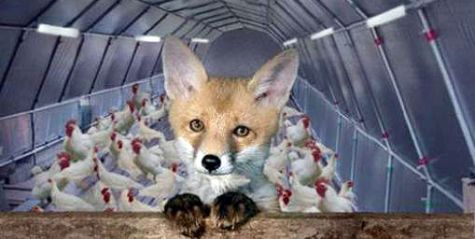 Fox Guarding The Henhouse
As noted below, Ms. Lennon’s background has been focused on prosecution and in providing legal advice to senior New York City Police officials.  This background represents the antithesis of skill sets necessary for the defense of the FALSE criminal charges. 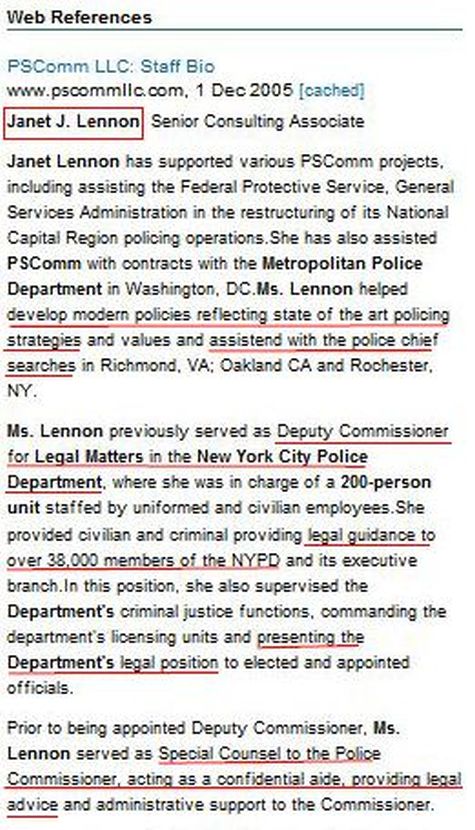 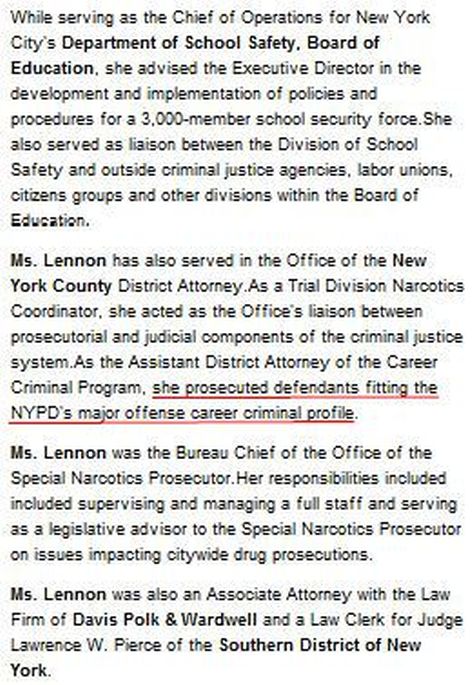 A Riddle Wrapped in a Mystery Inside an Enigma
Reflected below are screenshots of some example internet search results conducted on Janet J. Lennon and bring to mind the famous Winston Churchill quote used as the title of this section.  I believe it’s fair to say after running these inquiries, I have no idea who this person is, and raises some doubts as to whether this person really exists.  As noted below, there are no plan reviews nor peer endorsements. 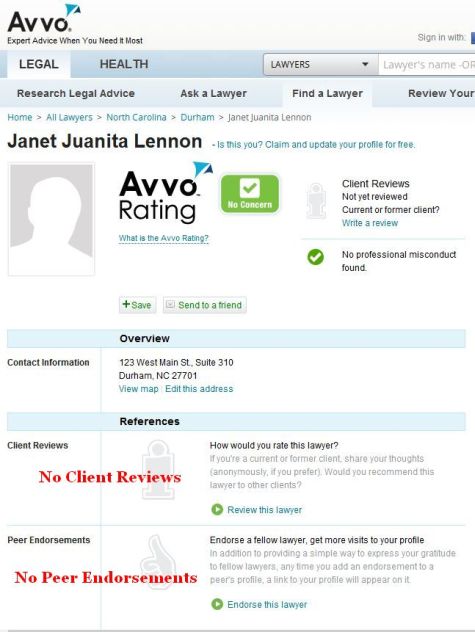 In most instances, one can rarely get more than a name address and phone number. . . 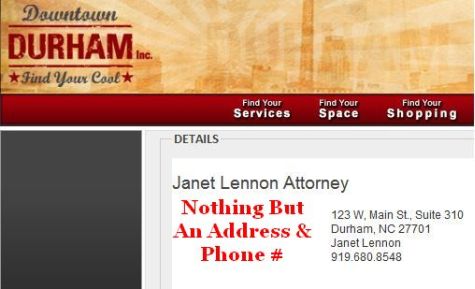 . . .  And concerning her legal expertise, little more is divulged than having a law license and being a member of the North Carolina State Bar. . . 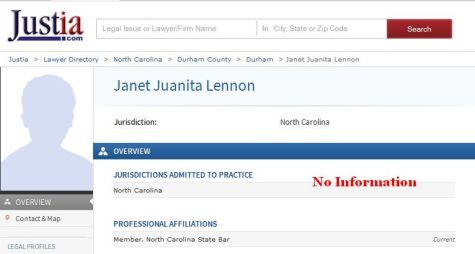 . . .  And in today’s 21st century Internet age, is beyond mysterious that as a sole practitioner, Ms. Lennon does NOT have a website. 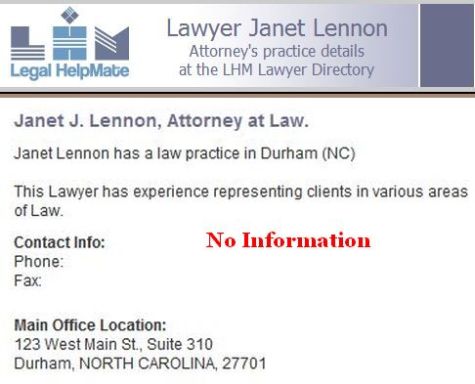 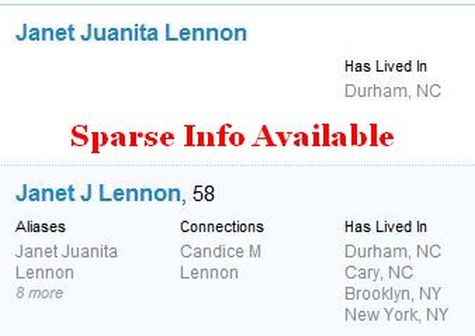 . . . And it is exceptionally strange that her lawyer profile on Martindale.com receives the top 6% to 9% of viewership traffic, while specific search engines used to hire an attorney, indicate that she does not exist. 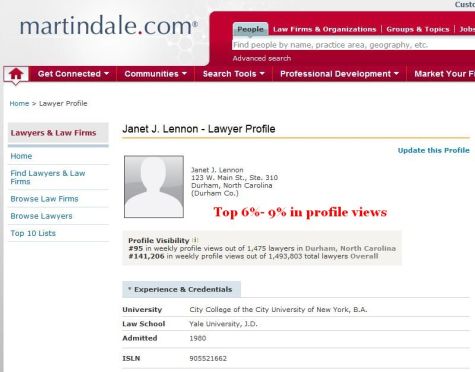 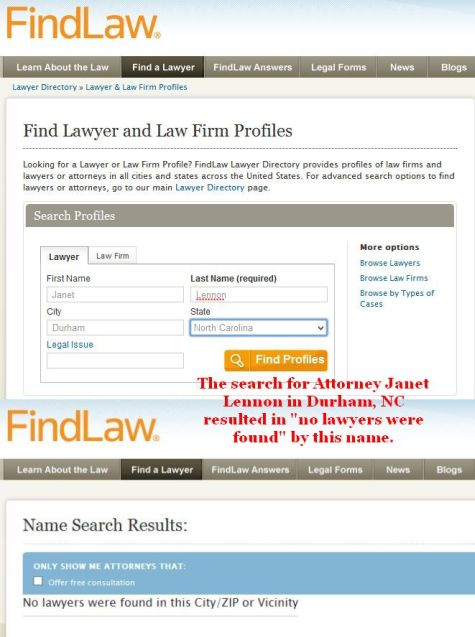 And in trying to run a search on cases she has handled, one comes away with the feeling that she’s handled very few cases, where the details have been purged . . . 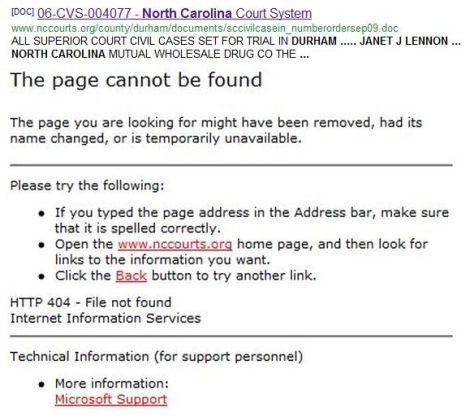 . . . and in those rare instances that reveals her involvement in a case, it has nothing to do with criminal defense, and it’s a case she ended up losing (see next page). . . 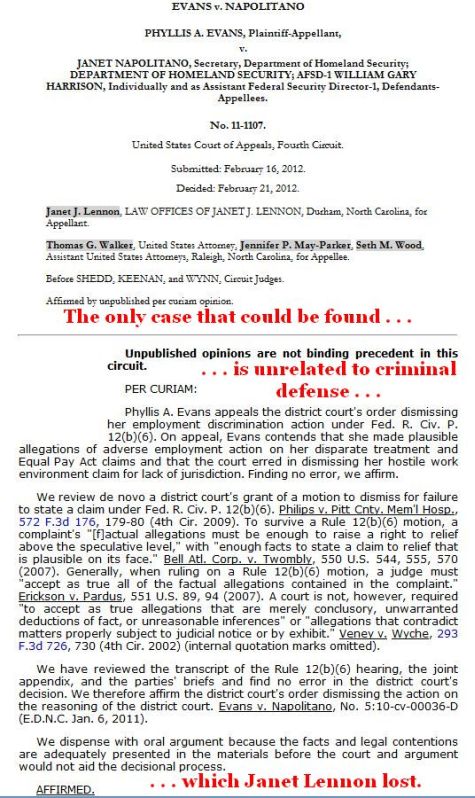 Concluding Remarks
In closing, I hope your actions in promptly selecting a fifth (and hopefully final) public defender will demonstrate integrity in the discharge of your responsibilities, and confirm that you are NOT involved in the aforementioned sinister cover-up.  This person should embrace and be willing to undertake meaningful actions to achieve the following THREE objectives:

Posted by Spencer C Young at 12:47 PM No comments: