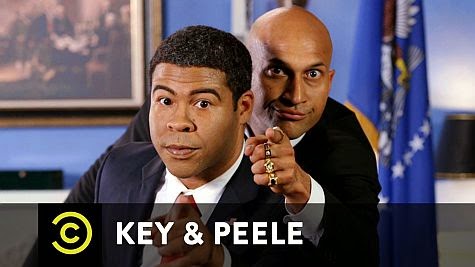 
Tarpon Springs, FL – December 20, 2014 – While considered politically incorrect for anyone NOT African-American to use the “N word”, it is generally accepted when uttered by rappers, comedians and celebrities of such racial persuasion – even if only partially so. For example, the rising comedy team of Key & Peele gratuitously uses it to hilarious effect, as in the video clip below. Similar to President Obama, both Keegan Michael Key and Jordan Peele have black fathers and white mothers, so should people be 50% offended by their use of it?.

The point is that it is a derogatory term popularized initially by slave masters and later embraced by bigots to connote a person whom they wrongfully believed was not 100% human. In fact, America's forefathers, you know the ones who signed the Declaration of Independence and the US Constitution because their rights were being infringed by King George III, continued to own slaves for decades thereafter and perversely rationalized people of color to be only 60% human in their Three Fifths Compromise.

Ergo, ANYONE, who is treated by others as "less than human" and deprived of their rights is a "nigger", and EVERYONE should do EVERYTHING they can to eradicate this distinction and help elevate their recognition as 100% human with ALL of their rights intact and protected !

As described herein, my rights have been trampled on as if I wasn’t human, sadly coinciding with the inhumane treatment accorded Michael (“Don’t Shoot, Hands Up”) Brown of Ferguson MO, and Eric (“I Can’t Breathe”) Garner of New York City, which is my home town. Thus, while I may be a Caucasian amalgam of Swedish-Danish-German-French-Irish descent, I have effectively lived the existence of a “White Nigger” for over twelve years, due to a diabolical, unrelenting and UNLAWFUL assault sponsored in the name of greed by Morgan Stanley, where I was formerly an Executive Director.
And as outlined in my Dec.18 press release, I am about to meet a similar untimely demise as Messrs. Brown and Garner, UNLESS valiant others will support me in standing up to the criminal acts of Morgan Stanley and the corruption-laden influence it perniciously wields through misuse of its $75 billion market capitalization, as if an 800 pound gorilla wreaking havoc.

Importantly, what Morgan Stanley has UNLAWFULLY done to me and my loved ones over twelve years should NEVER occur in America, must NEVER be tolerated, and must ALWAYS be exposed and confronted – for otherwise, as with ALL bullies, the situation will only worsen. My Oct. 6 Letter to Morgan Stanley’s Board of Directors & Management outlines just SOME of their UNLAWFUL acts of aggression employed in the name of greed, while my upcoming tell-all book, CannibalsIn White Shoes: The MorganStanleyGate Exposé details a MIND-BOGGLING level of criminal activities, on which I have a unique dual perspective as a former insider investment banking executive, and later as an undeserving target of this wayward firm’s vicious wrath. 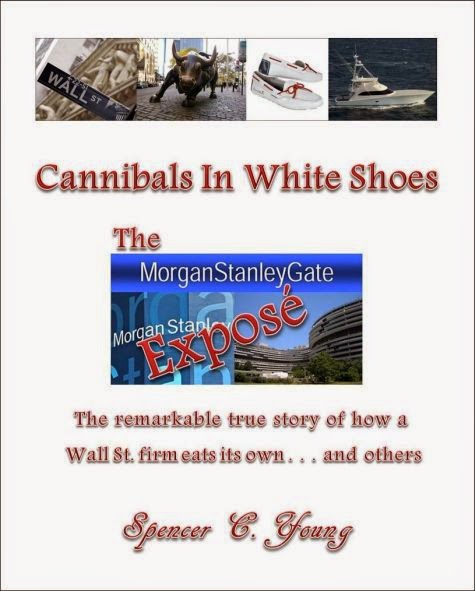 And although ALL conventional means of justice were assiduously pursued at the local, state and federal levels for a dozen years, I have been gamed at every juncture by the nefarious acts of one corrupt public official after the other. Moreover, I have been confronted by a surfeit of unethical attorneys also surreptitiously involved in these shenanigans. As a result, NONE of these OBVIOUS assaults have EVER been adjudicated nor otherwise addressed by law enforcement, as though their sponsor, Morgan Stanley, is above the law.

Thus if an Ivy-leagued educated lifetime member of Mensa can’t figure out how to obtain justice through conventional means for more than a decade, the outlook for the rights of most Americans is absolutely HOPELESS at this point.

And this gloom and doom assessment is the byproduct of a growing number of corrupt public officials and shameless lawyers devoid of integrity who have forged a collaborative tandem kakistocracy of public and private legal sectors, who serve at the beck and call of unsavory bidders. Hence the rights of most innocent and unwitting American citizens, be they civil/constitutional, property, due process or inalienable rights are non-existent TODAY.

Ergo, while I am certainly NOT alone in being deprived of my rights, the scope of my twelve year ordeal makes me an Angry White Nigger. And this fury is compounded by this kakistocracy’s modus operandi to ignore the grievances of the oppressed and disenfranchised. This is not only maddening, it yields unimaginable frustration and with it a devastating emotional pain from a hopelessness that suggests: “You are worthless and do not exist!”

So this Angry White Nigger is mad as hell and is not going to take it anymore, and has begun to “fight fire with fire”, by reaching out to 15 billionaires, some known personally. For instance: (1) I grew up around the block in Bayside, Queens from fellow Cornellian Jules Kroll; (2) I am a Chi Psi fraternity brother and a Graduate School colleague of Fisk Johnson; and (3) I was Corporate Controller of a company Mario Gabelli backed to take public.

As the net worth of this “Influential Fifteen” exceeds $300 Billion, they are immune to the fear and economic blackmail Morgan Stanley has employed against me and my loved ones, such as the: worst bank foreclosure fraud in US history (confirmed by Google); and killing of my wife of 24 years, whose valiant battle and passing was widely broadcast on ESPN and Fox in 2011.

The accompanying EXHIBIT lists those I am each proffering an “I Believe In You And Your Quest” investment proposal. For context, eliciting an investment of “five Woodrows”[1] from those in this group is the relative equivalent of $1.10 to the average American, or about half the price of cup of Starbucks Coffee. And “hitting the bid” will: (1) save my life; (2) achieve a long-delayed justice; and (3) launch important initiatives to help disenfranchised others victimized by bank foreclosure fraud, judicial corruption and police brutality.

Such support will also ensure the publication of Cannibals In White Shoes, and STOP Morgan Stanley’s criminal activities and cover-up once and for all.


IMPORTANT: the date of this press release begins the period in which Ron L.Svaty, the corrupt judge in rural Kansas (acting on behalf of Morgan Stanley in New York) has threatened to FALSELY arrest me in Florida and have me assassinated in an “accident”. Click here to access his many other crimes.

In response, a blog post along the lines of “I have lived another day” will be made DAILY on a new website that has been aptly titled . . .

So, if a day is missed, those who care will know I’m gone.

Mr. Young has a Bachelor’s degree in Hotel Administration and a Masters of Business Administration in Finance, both from Cornell University. He is a lifetime member of Mensa with an IQ in the top 1% (Stanford-Binet = 152; Wechsler = 135; Cattell = 156) and is reasonably proficient (but not yet fluent) in French, Spanish and German. His career in corporate finance and banking spanned nearly three decades at industry leading firms such as Dun & Bradstreet, Citicorp, JPMorgan and Morgan Stanley. At JPMorgan, he founded the Commercial Mortgage Backed Securities (“CMBS”) business and created the IQ®(“Institutional Quality”) brand of CMBS at Morgan Stanley. In aggregate, the franchises he founded or revamped are today worth $ billions.

In the event Mr. Young’s untimely demise is averted and CannibalsIn White Shoes is published, he looks forward to playing a leadership role in helping victimized others, while seeking a “positive” career that will help mankind thrive. He offers examples such as: “global availability of potable water through desalination; cheap renewable energy, hunger amelioration through hydroponics and artificial intelligence toward the inevitable singularity . . . but getting there before the bad guys do.”

EXHIBIT – Influentials Being Approached (no particular order, except lady first)

[1] The largest currency denomination issued by the US Treasury was $100,000, with Woodrow Wilson on its face.

Posted by Spencer C Young at 5:00 PM No comments: