The below press release was accorded wide distribution.
*  *  *  *  *
IMMEDIATE RELEASE
[Note: hyperlinks denoted herein are integral to this Press Release].


Tarpon Springs, FL – December 18, 2014 – File this under “seemingly impossible to believe, but sadly true”. Morgan Stanley has sponsored the assassination of Spencer C. Young, a former Executive Director of the firm, which is to be carried out on or after Dec. 20th through the fraud-based criminal acts of Ron L. Svaty, a notoriously corrupt judge in rural Kansas.

This killing is to be the “coup de grace” to the unimaginable 12 year nightmare Morgan Stanley has procreated in the name of greed, including the: 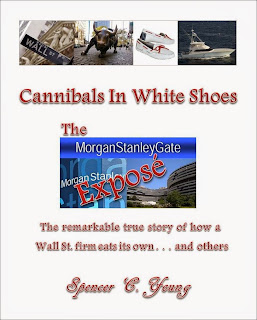 Morgan Stanley’s motivation in seeking to murder Mr. Young is based onintercepting the publication of his forthcoming tell-all book Cannibals In White Shoes: The MorganStanleyGate Exposé, which details the extensive criminal activities of this “too big to fail” bank, which was bailed out with $107 billion in taxpayer monies, as reported by Bloomberg News. This is the largest bailout ANY bank has EVER received and $97 billion more than was authorized by Congress.

This exposé of yet untold banking abuse is meticulously presented from dual perspectives, namely those of: (i) an investment banking executive “within the belly of the beast”; and (ii) an unsuspecting target of Morgan Stanley’s wrath. What makes these such a rare amalgam is the existence of first-hand accounts of the aggressor and victim of criminal wrongdoing . . . by the same person.


With this book, Mr. Young seeks to help oppressed others by giving them a voice and platform to meaningfully address their victimization, be it: banking abuse (e.g., foreclosure fraud); judicial corruption; or police brutality. In seeking to make Cannibals In White Shoes a best-seller, he has engaged the assistance of best-selling author Jack Canfield, literary marketer extraordinaire, Steve Harrison, along with others recognized in his Acknowledgements.

Now Back To The Planned Assassination . . .

Morgan Stanley’s motivation to cover-up the scandal (MorganStanleyGate) is clear. However, to mask its culpability, the planned “rub-out” is being predicated on an outrageously fraudulent paternity claim engineered by Ron L. Svaty, a wayward judge in Ellsworth County, KS, who possesses no jurisdictional authority whatsoever. And thousands of pages of overwhelming evidence of Svaty’s wrongdoing have been carefully catalogued and filed against him in multiple state-level ethics complaints and in a Federal “Color of Law”Indictment, where his disbarment and arrest are now aggressively sought.

Most recently, Mr. Svaty garnished Mr. Young’s bank account and made off with what little money he had, such that Mr. Young can no longer support his 88-year-old mother. And now the woefully corrupt Svaty seeks to UNLAWFULLY arrest Mr. Young for being unable to pay a BOGUS paternity claim from a state with no jurisdiction on behalf of a five-time-felon and resident of North Carolina, who made off with over $200,000 of property in another related scandal. Such irrationality is symptomatic of an egregious FRAUD.

So Who Can Help?

With the FBI proving useless (and perhaps complicit), Mr. Young sought help from friends, some of whom are wealthy by most standards; however, they are afraid to help for fear of retribution. Such fear (whether real or not) underscores how truly dangerous Morgan Stanley is at this point, and a compelling reason why Cannibals In White Shoes simply must be published.


One friend would appear immune from such fear due to his prodigious resources as a billionaire. With a net worth of $1.5 billion, he just missed the cut in the Forbes 400 listing. Growing up around the block from each other in Bayside, Queens, Mr. Young was a frequent visitor at his home, as a close friend of younger brother Danny. They are also both alumni of Cornell University.

His name? Jules B. Kroll, the founder Kroll Inc., the largest private investigation firm in the world. Jules is ideally suited thwart Mr. Young’s assassination, and swiftly resolve the MorganStanleyGate scandal, pursuant to a proffered proposal. And as benefactor/trustee of John Jay College of Criminal Justice, having the back of his long-time neighborhood friend and fellow Cornellian would seem be the right thing to do, right? Stay tuned.

Reflecting upon the defenseless position he now finds himself in, Mr. Young mused: “I hope this madness stops before I am assassinated, as Ron L. Svaty is one of the most dangerous domestic terrorists imaginable. He represents kakistocracy and is the epitome of ‘a wolf (i.e., criminal) in sheep’s clothing (i.e., judicial garb)’, as he terrorizes his victims under a false guise of legal legitimacy, and with arrogance, as though above the law, ergo . . .“Ron L. Svaty is a Monster!”

About The Person Targeted For Assassination . . .


Spencer C. Young is a widowed 58 year-old father of three adult sons, Michael, Kevin and Ryan, who each overcame adversity and graduated with honors as student-athletes at Duke and Maryland. He loves and misses them dearly, and hopes his planned assassination can be stopped, so he may reveal “the many hidden truths” of MorganStanleyGate and reunite with each of them.

Mr. Young has a Bachelor’s degree in Hotel Administration and a Masters of Business Administration in Finance, both from Cornell University. He is a lifetime member of Mensa with an IQ in the top 1% (Stanford-Binet = 152; Wechsler = 135; Cattell = 156) and is reasonably proficient (but not yet fluent) in French, Spanish and German. His career in corporate finance and banking spanned nearly three decades at industry leading firms such as Dun & Bradstreet, Citicorp, JPMorgan and Morgan Stanley. At JPMorgan, he founded the Commercial Mortgage Backed Securities (“CMBS”) business and created the IQ® (“Institutional Quality”) brand of CMBS at Morgan Stanley. In aggregate, the franchises he founded or revamped are today worth $ billions.

Mr. Young seeks long-overdue justice as the protagonist victim in the MorganStanleyGate scandal. In so doing, he seeks restitution such that his once exemplary reputation will be reinstated, while regaining what was stolen, and reuniting what is left of his family.

In the event Mr. Young’s untimely demise is averted and Cannibals In White Shoes is published, he looks forward to playing a leadership role in helping victimized others, while seeking a “positive” career that will help mankind thrive. He offers examples such as: “global availability of potable water through desalination; cheap renewable energy, hunger amelioration through hydroponics and artificial intelligence toward the inevitable singularity . . . but getting there before the bad guys do.”