This is the third of 7 simple steps  toward participating in the "Find a Professional" Challenge, which (with little effort on your part) may result in: (1) a big payday for YOU; (2) helping many disenfranchised victims of banking abuse; AND (3) charitable contributions made in YOUR name to causes such as cancer research, disaster relief and rooting out corruption.

A "recursive incentive structure" simply creates a "teamwork environment" where those who cooperate and share information with each other toward a common goal (in this case, finding a Professional engaged to run a Project) are rewarded in proportion to their role in finding this Professional.

If you "find" or help successfully "refer" a professional with the skill sets we're looking for, you will receive at least one, and as many as three forms of "Reward Payments".  One you get right away, while the others come at a later date, upon project completion:

The Success Payment exactly mirrors the parameters used by MIT in their Red Balloon Challenge, and is illustrated in the chart below.  The "Finder Fee" is in the first unshaded column and the "Referral Fees" are shown in the interior columns, while the last column reflects how much would be donated to charity. 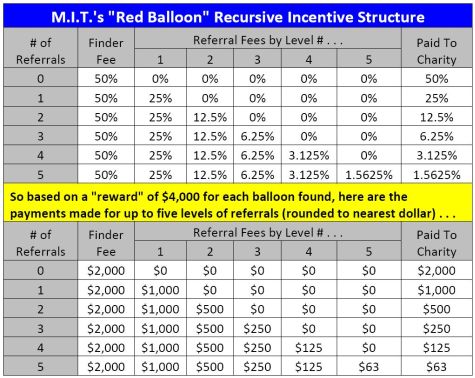 Example of Success Payments
As in the Red Balloon Challenge, a $4,000 reward is allocated for each successful referral.

If a friend-of-a-friend finds the Hired Professional, all three of you get paid -- the "Finder" always gets $2,000, and each referring person involved in the  successful "Referral Chain" gets a Referral Fee equal to one-half of the fee paid to the person sequentially before them in the Referral Chain.  So in this example, your friend gets a $1,000 "Level 1 Referral Fee" and you get $500, representing a "Level 2 Referral Fee" -- therefore, in aggregate the three of you receive $3,500.

In all cases, what remains of the $4,000 (in this latest example, $500) is donated to the American Red Cross in the name of each person involved in a successful Referral.

This arrangement exactly mirrors the incentives employed by MIT in the Red Balloon Challenge , but . . .

The Additional Rewards
The Finder and Referral Fees are only the beginning because with MorganStanleyGate a great deal more is involved (e.g., money, franchise value, reputations).  Accordingly, members of each successful Referral Team will also receive:

Therefore, a "Referral Team"
can potentially be paid
"Additional Rewards" equal to . . .

Example of Additional Rewards
If you made a successful Level 1 Referral involving an attorney who took on the Wrongful Arrest and False Imprisonment case, and he/she obtained an award for damages of $30 million (this was the settlement amount in a similar case involving the SAME municipality, where the assault on American civil liberties was FAR LESS SEVERE), you  would receive a direct reward of $200,000 and your friend who actually found that attorney (who would have had a $10 million payday) would receive a direct reward of $400,000.

And even if the attorney you successfully referred had failed to obtain any damages, if the other projects yielded their probability adjusted net proceeds, you and your friend would receive indirect rewards of $30,000 and $60,000 respectively. And these amounts would also be additive in the event of your referral's success.

Accordingly, when factoring into account the initial finder and referral fees, the respective total paydays would be $231,000 to you and $462,000 to your friend. 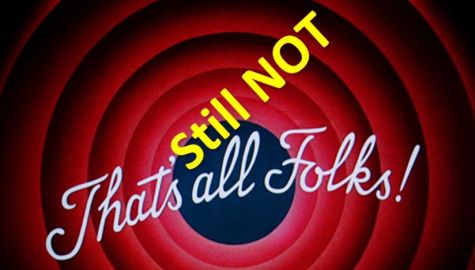 Donations Made In Your Name
And reward residuals will be donated evenly between Susan G. Komen for the Cure, the Lustgarten Foundation, the American Red Cross and the MEVEP Foundation, a charitable organization that will be established to help others similarly affronted by banking abuse and judicial corruption.  Using the example scenario with you and your friend, $57,750 would be donated to these charities in YOUR names.