Unjustified Panic at Deborah's Day Care . . . And Jackson Needlessly Suffers as a Result

Leah Krier called Spencer Young some time after midnight on April 9, and confided she had been crying all week, from an overwhelming realization that "Jackson needs his father", and then continued with an admission that floored him "And I still care very much for you".  Astonished by what he was hearing, he asked "Are you saying you love me?", to which she hesitated and reluctantly replied in a demur, almost inaudible voice, "yes". 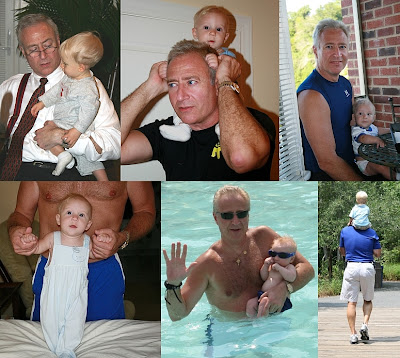 She then went on to say "and I really don't care what you say about me in your emails, or on your websites at this point.  It doesn't bother me anymore . . . but NONE of it is true.  I just go to work, care for Jackson and go to school and that's it."

Mr. Young began to slowly stand up, after having fallen out of his chair.  In the context of what appeared to be overwhelming evidence to the contrary, he had to ask: "Are you telling me, you have not had sex with another man since you left me?"  She replied more assertively "no".

Mr. Young inquired further,  "So when you moved out last summer from Danny's (the man she secretly moved in with the day after their fraudulent eviction), where did you move to?"   Leah retorted: "I moved back to Kansas with Jackson. I moved my stuff a little at a time."  Something didn't quite make sense, but Mr. Young remained silent so as not to disrupt this long-awaited candor and encouraging flow of conversation.

Mr. Young was encouraged, but skeptical of Leah's dramatic change in attitude and pleasantness, particularly in the context of how she had been bombarding Mr. Young for the past few months with a variety of meritless legal claims (in TWO states, no less) against him, which were rife with audacious lies and patently fraudulent representations.  Most notably among these were preposterous allegations of domestic violence, which she admitted to having fabricated in this phone conversation.  Notwithstanding, and for the record, Mr. Young has never, would never, and frankly could never engage in something so reprehensible and cowardly.

His mind kicked into deductive overdrive as he mentally matched up what Leah was saying  with his recollections of entirely contradictory prior statements, such as: "I hate you!"; "I never want to see you again!"; "I've never before felt such hatred toward someone!"; "I wish you would drop dead!"; "You've ruined my life!"; "You're a deadbeat Dad and a loser!"; "You are not a father to Jackson!"; and "You are nothing to him!"


Coping With an Irrational Shrew

While it's no picnic being on the receiving end of such admonishing tirades, Mr. Young has not let Leah's emotional outbursts get him down, and he has tempered any compulsion to lash out in response.  This is because he knows: (1) nothing could be further from the truth; (2) Leah has been subjected to significant chronic stress (albeit much of it, self-imposed); (3) she has a "type-A" personality where she often  gets herself so worked up, she invariably reaches a point of unadulterated viciousness for which she later feels remorseful; and (4) the trials and tribulations that have impacted Leah most are manifestations of the MorganStanleyGate scandal, and upon its resolution, they will all go away.

As suddenly as glimmers of hope had appeared, a deluge of soaking rain descended upon this short-lived festive parade, as Leah abruptly segued to choruses of ". . .but you've got to get mental help, Spencer -- you're sick -- you're not right".  Mr. Young began to experience the all-too-familiar feelings of cynicism and profound disappointment overcome his short-lived ebullience, along with resonating thoughts of "I KNEW this was too good to be true".


Perhaps Leah hadn't changed after all, and her motivation for suddenly calling him was pursuant to the diabolical directions from her notoriously deceitful attorney (Jane Isern), in a last ditch effort to save an otherwise lost cause in her bogus claims against Mr. Young.  This is because the only way of prevailing would be if Mr. Young voluntarily declared "You know, come to think of it . . . you're right , I am a nut job, and I should be committed to an insane asylum".  Unfortunately for Leah and Jane, that is NOT going to happen because there is no truth to that whatsoever.

On Monday, Apr. 11, Mr. Young received a faxed copy of Leah's admittedly fabricated Domestic Violence claims and noted an entry in the pro se complaint form she filled out that fully contradicted her earlier representation about having moved to Kansas last summer.  The form asked for the name of the school the dependent child (i.e., Jackson) attended and Leah entered: "Deborah's Daycare".  The entry in Leah's handwriting is shown below

This sounded familiar to Mr. Young, so he "googled" it and up popped details of this quaint pre-school located in Durham, NC address, along with a map, satellite picture and street level picture. 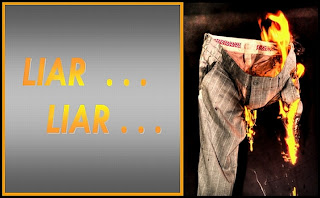 Dispirited by Leah's OBVIOUS LIE, Mr. Young began to surmise perhaps NOTHING Leah said was true.  And as he reflected on this likelihood, he was struck by how much he wanted to believe her, but simply could not  . . . because Leah was once again caught red-handed  in a BOLD-FACED LIE, consistent with her now notorious history as a PROLIFIC LIAR.  He then struggled to suppress angered thoughts from creeping into and setting up permanent residence in his mind.  To counteract these dark thoughts, he kept thinking/hoping: Leah is inherently a good and kind person . . . she's just being horribly manipulated and misguided by some exceptionally convincing outside sources with a decidedly evil agenda.

Mr. Young decided to call Deborah's Day Care ("DDC") in the late afternoon (4:15 pm) of Monday, April 11, and a pleasant voice greeted him.  He introduced himself as Jackson's father and inquired about his son's matriculation there.  The initially gregarious and forthcoming woman who answered the phone, and had introduced herself as "Emily" or "Miss Em", suddenly became icy cold and refused to answer any questions, and brusquely suggested Mr. Young call the next day at 10:00 am, when the owner, "Deborah" would be in.

As they were wrapping up their phone conversation, Mr. Young reiterated the purpose of his call was to inquire about, and assess the health, safety and welfare being accorded his toddler son whom he had only recently learned was attending their pre-school.  He went on to say her refusal to provide ANY information to a parent father was "wrong", "suspicious" and "personally insulting".  She oddly hung up on him before he could finish his sentence, and ensuing calls went unanswered.


At 10:00 am the next day (Apr. 12), Mr. Young called DDC, and when the phone was picked up, he heard some commotion and raised voices in the background.  Miss Em, answered, but quickly handed the phone to "Deborah", who was notably guarded in what she said while advising Mr. Young that a Sheriff's deputy was standing by her side.  Mr. Young did not know what to make of this; however, after getting past some awkward initial conversation, Deborah determined Mr. Young was not at all "as described" and therefore the Deputy's services were not required.  They then candidly engaged in a lengthy pleasant and constructive conversation.

Mr. Young began by asking: "What was THAT all about?".  Deborah explained the events that unfolded yesterday, after his initial phone call.  Under most circumstances, Mr. Young would have been shocked; however, with regard to his experiences in the Triangle Region of North Carolina, dating back to the Summer of 2007 (when his investment properties first began experiencing sabotage), this sort of nonsense was fast-becoming the norm, so here's a precis of the histrionics that unfolded from yesterday's two-minute phone call:


You can't make this stuff up and it might be hilarious if an innocent little three-year-old didn't have to suffer the consequences of what is now complete family dysfunction in the aftermath of what is perhaps the worst bank foreclosure fraud in U.S. history. and yet another chapter of misery stemming from the MorganStanleyGate scandal.

The Impact of Losing a Father 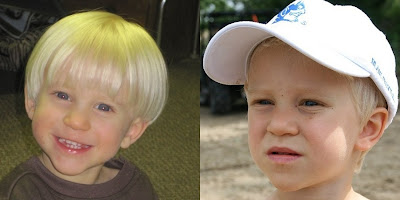 Aghast at what he heard, Mr. Young explained how very sorry he was that his brief (2 min.) phone call inquiry had somehow sparked a panic of this scale.  In return, Deborah graciously extended her apology for the misunderstanding and agreed Mr. Young's intentions were legitimate, reasonable and something she would expect any caring and prudent parent would do under the circumstances.  In fact, she said it pains her to see how many parents really don't care much about their child.  And given the accomplishments of Mr. Young's three adult sons, it appears he must have done something right in their care and upbringing.

Predicated on their extensive conversation, she went on to say Mr. Young was "nothing at all like he was described to be" by Leah, rather he was obviously a prudent, reasonable, and caring parent who very much loves his son.  She went on to say there was nothing unreasonable about his inquiries in wishing to know the whereabouts, care and safety of his child, irrespective of what the relationship may be between the parents.

Mr. Young asked Deborah to reconsider her decision to expel Jackson from her pre-school and she gladly agreed to reinstate him immediately, going so far as to say she would call Leah and Linda right away and meet with them that night to personally apologize for the misunderstanding.  She mentioned Leah had originally planned to have Jackson's birthday party at her pre-school on April 14th (Jackson's birthday), and she wanted to be sure Leah knew of the misunderstanding and resultant decision right away.

Mr. Young said he would also contact Leah and Linda (Leah's mother) to ensure they understood what transpired, so that they would not over-react any more than they already had.


Throughout the ensuing two days, and up to the time of this posting on Jackson's 3-year-old birthday, Deborah and Mr. Young frequently attempted to contact Leah, who oddly did not accept, nor return their phone calls.  Moreover, Leah instituted calling and text messaging restrictions that blocked any and all attempts by Mr. Young to reach her, or her mother.  Deborah was able to briefly speak with Linda who seemed to indicate Jackson would no longer attend Deborah's Day Care.


How very unjust and sad . . . most especially for Jackson. 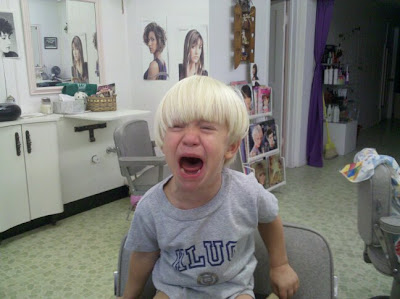