The Elephant in the Room Can No Longer Be Ignored 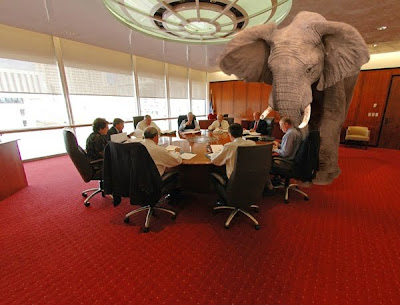 To: The Board of Directors of Morgan Stanley

The FBI and the Manhattan District Attorney’s Office have been provided information on instances of fraud, corruption, racketeering, extortion, sabotage and activities having elements of antitrust, the particulars of which will be made available to you shortly[1]. Metaphorically, these illicit activities are the “Elephant”, and are the manifestation of a Machiavellian scheme initiated five years ago by two Morgan Stanley employees – Warren Friend and John Westerfield (with the assistance of Tony Tufariello).

As a result, I (and many others) have been victimized by an orchestrated campaign of fantastic lies, which parallel the audaciousness and debilitating effects of those that procreated the “Duke Lacrosse Scandal”.[2]  And perhaps because of my unwillingness to acquiesce to such victimization, this Elephant has transmogrified to:
Ø      Destroy my career;
Ø      Destroy my reputation;
Ø      Destroy my marriage;
Ø      Destroy my once close and loving family; and
Ø      Destroy the dreams for countless others.

Importantly, these transgressions were carried out with the knowledge and oversight of senior management at Morgan Stanley, with certain individuals at the law firm of Kirkland & Ellis serving as accomplices. Indeed, if the corrupt practices and deceitful undertakings employed against me are as pervasive and unfettered as I believe they may be, the consequences could be dire for many, and potentially undermine Morgan Stanley as a going concern – because no person and no corporation is above the law.

What is especially troubling is John Mack was apprised of the misdeeds shortly after his arrival as CEO[3]; however, instead of rectifying what should otherwise have been a pedestrian matter, the frequency of orchestrated transgressions increased, and their ferociousness only amplified.

The Dimensions of the Room

In the context of where this Elephant has made its unwelcome appearances, I am metaphorically speaking of a very large “Room” – entailing:
Ø      Morgan Stanley – certain employees;
Ø      Various law firms – certain attorneys;
Ø      The NASD – certain staff members;
Ø      NYS Supreme Court Disciplinary Committee – certain staff members;
Ø      Operatives – working through a network of surreptitiously pandered influence (many times removed to preserve Morgan Stanley’s anonymity), encompassing a broad spectrum of arenas, and spanning as large geography as necessary; and
Ø      Perhaps certain law enforcement officials.

So this rogue Elephant (metaphorically ridden by Morgan Stanley) has been chasing me throughout this enormous Room for nearly five years, intending to wear me down so I will collapse from exhaustion, and thereby enable this pachyderm to finally crush me under one of its gargantuan feet.

Without question, the progenitors of this elephas maximus will seek to dismiss this matter as the mere ranting of a disgruntled former employee – however, upon examination, you will soon realize the seemingly implausible indictments are not only true, many are readily corroborated. And this is why the perpetrators have gone to outrageous lengths to cover up their massive fraud, and in so doing, destroy lives and livelihoods.

This matter bears many similarities to the Watergate scandal – for instance, the initial transgression was relatively minor; however, the ensuing instances of corruption and cover-up exacerbated the situation, such that there may now be significant consequences – and as you know, the truth was eventually uncovered and led not only to the demise of an administration, it cast a pall of public suspicion on the Executive Branch that some say never went away.

I am committed in my quest for justice, evidenced by having inscribed a Latin aphorism in the coping of a water fountain at a property I am redeveloping on Franklin Street in Chapel Hill, North Carolina – it reads “Magna Est Veritas Et Praevalebit” (translation: “Truth is Mighty and Will Prevail”). So my caveat to you, the Board of Directors of Morgan Stanley, is this – resist the predictable inculcations to dismiss this devolving “MorganStanleyGate” without due inquiry – for by doing so, you will tacitly endorse the shrouding of truths that will otherwise be self-evident, and thereby undermine the “unalienable rights [to] life, liberty and the pursuit of happiness”[4] for many – more to follow.


[1] These indictments have been made with much forethought, and certainly not cavalierly – refer to attached definitions for context, and note that they are provided to convey the nature of such serious charges.
[2]  I have two sons who play for the Duke Men’s Lacrosse team, one of whom experienced being: vilified by the media;
ostracized on campus; and subjected to death threats, because of a rush to judgment and an ignorance of the truth – the
repugnant scandal that ensued was quite simply the result of failing to make due inquiry before drawing conclusions.
[3] Refer to attached correspondence to John Mack dated July 5, 2005, which also contains a précis of the matter at hand
[4] Thomas Jefferson, as authored in The Declaration of Independence by the , July 4, 1776
Posted by Spencer C Young at 7:26 PM