There are TWO primary themes associated with the worst bank foreclosure fraud in U.S. history, which was principally executed in North Carolina, sponsored by Morgan Stanley and executed in a collaborative manner by Wachovia Bank (now a wholly-owned subsidiary of Wells Fargo) and Paragon Commercial Bank, via close "good ole boy" ties in North Carolina at the senior executive level:

This highly orchestrated bank foreclosure fraud was carried out on $22 million of real estate properties, and with one exception, the properties were located in North Carolina, which served to collateralize $9 million of mortgage loans. 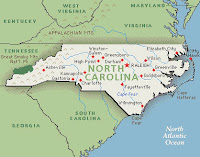 The CEOs involved at the time this audacious bank foreclosure fraud was executed were all born, raised and educated in North Carolina, to wit:  John Mack of Morgan Stanley; Bob Steel of Wachovia Bank; and Bob Hatley of Paragon Commercial Bank. 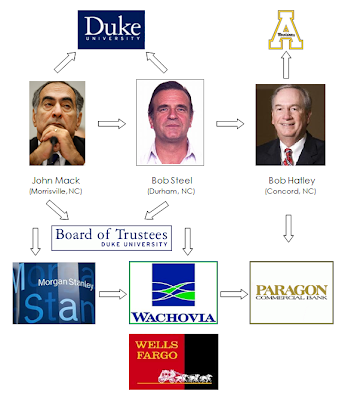 Resolving the worst bank foreclosure fraud in US history is quite simple:  merely commence criminal investigations on the brazenly obvious foreclosure fraud by Paragon Commercial Bank, and the house of cards culpability of Wachovia/Wells Fargo and Morgan Stanley will come tumbling down.  And note these banks received $35 billion in taxpayer bail-out monies, and hundreds of billions more in secretive "printed money" taxpayer loans from the Federal Reserve.