This entry covers . . .
FRAUD ELEMENT # 13
which involved . . .
Preventing Engagement of Legal Counsel
In Efforts to Deny Rights to Due Process


Spencer C. Young was denied due process and deliberately precluded from contesting this OBVIOUS FRAUD with clear, convincing and irrefutable evidence, which if allowed to be presented in ANY one of the many fraudulent foreclosure proceedings would have debunked the absurd and completely fabricated claims of the Paragon Commercial Bank and exposed their audacious FRAUD.

Overview
This denial of due process was the result of three factors:

Something Is Rotten In Denmark . . . 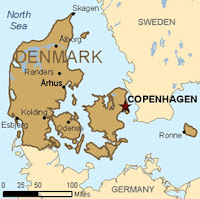 . . . if foreclosures on $20 million in real estate can proceed UNCONTESTED on someone with Mr. Young's:
So how could something as preposterous as this come to fruition?

Picking Up Where Wachovia Left Off
The preponderance of The Worst Bank Foreclosure Fraud in U.S. History was collaboratively executed by Wachovia Bank and Paragon Commercial Bank, and at the behest of Morgan Stanley.

This fraud began in the Summer of 2007 at The Courtyard of Chapel Hill with extensive commercial sabotage, and Wachovia completed their fraudulent foreclosure on this property in early 2009 because Mr. Young was UNLAWFULLY denied legal representation.  The worst foreclsoure fraud in US history then culminated with Paragon's UNCONTESTED foreclosure on, and violent eviction from Mr. Young's residence in Chapel Hill, NC on February 2, 2010.

How This Was Done
This inexplicable ability to exercise one's right to legal due process followed the EXACT methodology employed in New York with employment law firms shortly after the outset of the MorganStanleyGate scandal.  To get a sense of how this was carried out in North Carolina, one need only read the:

Why This MUST Be Corrected
These UNCONTESTED foreclosures metaphorically spit in the face of inalienable rights to life, liberty and the pursuit of happiness, as professed in the U.S. Declaration of Independence, and trampled all over the right to legal due process guaranteed by the U.S. Constitution.

Importantly, Congress did NOT bail out Banks so they could defraud and persecute the taxpayers who bailed them out. Moreover, the corruption observed in this matter alone, suggests a threat to the integrity of the U.S. Justice System may exist.
Posted by Spencer C Young at 3:44 PM