Jailing Innocent Americans To Cover Up A Judge's Felonies Is "Frivolous"?

The cover-up efforts continue with new corrupt public official entrants being continuously added to the mix, as this scandal continues to grow unabated.  And the level of corruption only becomes more brazen and recklessly desperate, while following the very same banal and unlawful three-point formula for judicial  domestic terrorism - to wit . . . 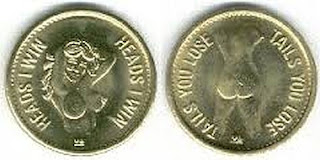 And those "domestic terrorists" who are involved in these practices are so megalomaniacal and narcissistically drunk with misplaced power, they seem to relish their "Heads-We-Win and Tails-You-Lose" charades.

Most recently, the OBVIOUSLY corrupt public official who entered the picture is US District Court Judge James S. Moody Jr., who proudly declares he was originally appointed to his post by President Clinton, to which the following should be kept in mind: (1) Presidents who appoint low level District Court judges rarely know them personally and rely entirely on others who treat their recommendations as purely political "capital" with which they trade quid-pro-quo favors; (2) President Clinton is certainly not immune from poor judgment, as his impeachment in the "Monica Lewinsky Scandal" serves as a rather embarrassingly poignant example; and (3) at one time Bernie Madoff, perhaps the most notorious criminal swindler in history, was once considered a titan of industry with integrity considered beyond reproach, and we all learned that his true character was quite a lesson to the contrary.

Mr. Moody's reckless attempt to dismiss the $254 million "Color of Law" Civil Rights Lawsuit filed against 26 public officials in Florida and North Carolina is an example of the IGNORE and DISMISS elements to this form of domestic terrorism in an effort to cover up the PURSUE element, which in the matter at hand involves . . .

Innocent American Citizens To Cover Up

The Felonies Of A Judge

And Mr. Moody somehow concluded something so serious to be "frivolous" ?!?  But that's not all -- his first of three reasons for dismissing the case is a bold-faced LIE, which he subsequently tried to cover up with a feckless "Amended Order of Dismissal" -- and in his haste to cover up his perjury, he managed to screw up the named defendants, including a person who likely doesn't exist and then failing to include another key perpetrator entirely.

Reflected below is the letter accompanying the RE-SUBMISSION of the $254 million "Color of Law" Civil Rights Lawsuit, along with a requisite demand that Mr. Moody have no further involvement, as follows:

The reckless disregard for the facts in the Complaint, the gross misrepresentations of its contents vis-à-vis operative procedural rules and his indefensible bold-faced LIES suggest James S. Moody, Jr. is not competent, and or has severely compromised ethical standards that have no place in this matter. 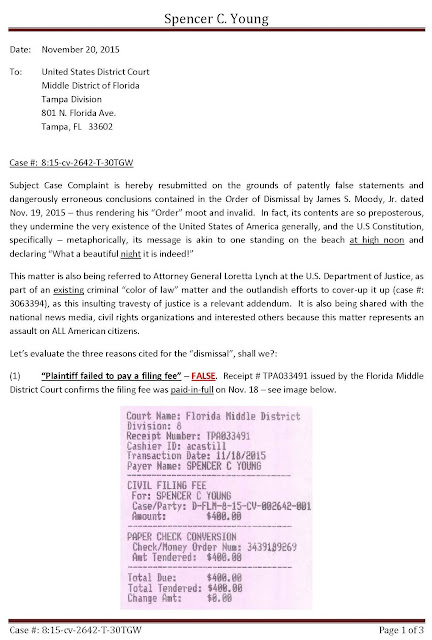 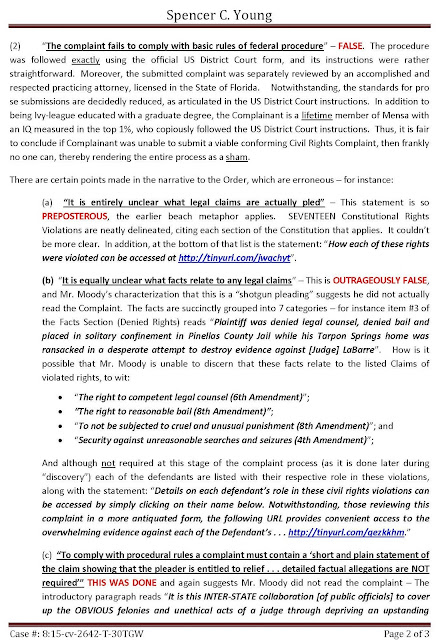 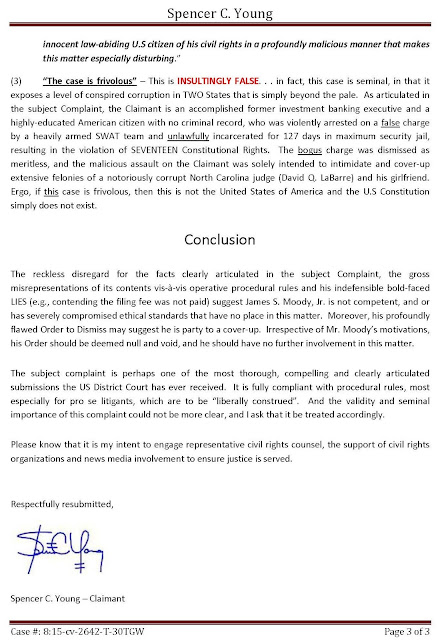