The below correspondence is self-explanatory, and represents an important step toward regaining that which was taken away from my loved ones, who have been especially innocent victims of the MorganStanleyGate scandal.  In this case, it's reacquiring the home my three now adult sons were raised -- 74 Eakins Road in Munsey Park, NY. 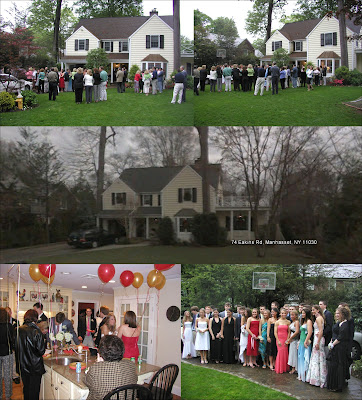 December 3, 2011
Robert H. & Jill A. Harvey
74 Eakins Road
Manhasset, NY  11030
Re:  Real Estate located at 74 Eakins Road – Parcel #: Section 3, Block 109, Lot 13, Town of North Hempstead, Nassau County (the “Property”)
Mr. & Mrs. Harvey:
As you know, the Occupy Wall Street (“OWS”) movement sweeping the nation is a clarion call to root out rampant greed and corruption, and reclaim our country as our forefathers intended.  In my opinion, although the encampments have been dismantled in a manner that assaults the 1st Amendment right to assemble, this  continues to grow, and will eventually become the most seminal global social movement in mankind’s history.  Just do the math: What is 99% of seven billion?
I preface in this manner because the circumstances surrounding the sale of my home in Manhasset is associated with this powerful grassroots movement, and is also the basis for my “from the heart” request to eventually repurchase it.   However, to understand this association, I ask for your indulgence by providing a précis of my background, two empirically valid premises, and a logically deduced conclusion.
Background
At Morgan Stanley, I built its commercial mortgage-backed securities (“CMBS”) conduit business (entailing lending and securitization) into a market leader and created the highly successful IQ® (“Institutional Quality”) franchise.  Prior thereto, I founded the CMBS business at JPMorgan, serving as Chief Operating Officer for its commercial mortgage finance and securitization business.
The intrinsic shareholder value thus created by these franchises at each of these “Houses of Morgan” exceeded $1 billion.  And over my career, I was directly involved in, or otherwise responsible for over $30 billion in transactions, while more on my background can be accessed at SCYInv.com.
Now for the particulars – and please recognize these premises are what I know to be absolutely true, based extensive first–hand knowledge as a former Wall St. insider / investment banker, as well as the eventual target of unrelenting avarice-driven wrath.
Premise # 1:  “MorganStanleyGate” Is Linked With the Occupy Movement
What began as a relatively pedestrian employment fraud by colleagues at Morgan Stanley eventually transmogrified into a scandal of now epic proportion, and due to its parallels with that of the Watergate scandal, it has been aptly coined MorganStanleyGate (TWSYF.com provides a cogent overview).
But how can a seemingly parochial matter be linked with this now massive, and continuingly evolving Occupy movement?  Answer:  Those who instigated MorganStanleyGate (its beginnings are explained at MEVEP.com) were ALSO responsible for Morgan Stanley’s entrance into the toxic sub-prime residential mortgage business.  Their names are Tony Tufariello, John Westerfield and Warren Friend – each has since been fired.  And how is this relevant?
To use now popular OWS vernacular, this nefarious trio of reckless “One-Percenters” were driven by unbridled greed to take on risks they hardly understood, eventually leading to ASTRONOMICAL losses that brought Morgan Stanley to its knees, ended its days as an investment bank.  This necessitated a $10 BILLION Congressional bail out with taxpayer money (and countless other billions of “printed money” secretly loaned by the Fed at 0% (i.e., “free money”) to stave off Morgan Stanley’s otherwise certain demise.
Ergo, those who instigated the MorganStanleyGate scandal also played instrumental roles in wrecking OUR economy, and in oppressing the “99-Percenters” who comprise the OWS movement – hence proving the veracity of this first premise.
Premise # 2:  MorganStanleyGate Is Linked With 74 Eakins Road
And how is MorganStanleyGate germane to this Property?  The home in which you now reside was sold under duress in order to avert foreclosure by Morgan Stanley, a situation which this firm directly caused by abruptly ending my Wall St career in order to protect a valuable franchise I had created, and known as the IQ® (“Institutional Quality”) brand.
Sadly, this premise is as obviously causal, as he is tragic – for I lost a great deal more than this home.  And while I can’t regain all that was taken, I am intent on piecing together that which I can – hence this letter.
Conclusion:
Deductive reasoning logically leads to concluding the subject Property is very much linked to The Occupy Movement.
Years of Tribulation
The unimaginable transgressions directed against me (and my loved ones) spanned NINE YEARS, entailing acts of retaliation intended to thwart my pursuit for justice and to deprive me of resources necessary to collect on these mounting civil claims.   The resultant unrelenting and often overwhelming stress ended my marriage of 24 years, and in effect caused my wife Maria’s pancreatic cancer, the dreaded disease from which she passed away in April this year.  I’m definitive in linking the causal effect of Maria’s cancer because she had no family history of cancer, nor did she drink or smoke.
My Interest in Repurchasing
I have reason to believe this long nightmare may finally be ending, and when that time arrives, I would ask you consider my interest in repurchasing 74 Eakins.  This is important to cause is where my three now adult sons were raised, and there are over two decades of wonderful memories there.   To us it is more than a home – it is a family treasure, which holds great sentimental value.  Importantly, it would have never been put on the market, had we not been victimized in the MorganStanleyGate scandal.
A Matter of Public Interest & Next Steps
As the sale under duress was part a six property ($22 million) foreclosure fraud orchestrated by wayward executives at Morgan Stanley, Wachovia and Paragon Commercial Bank, this transmittal is also being shared with approximately 1,800 news media organizations, relevant government and regulatory officials, and numerous activist groups.  It has also been posted on-line at various websites – for example, you can visit MorganStanleyGate.com and click on “Manhasset Residence” on the side bar to access this particular letter.
In closing, please understand the primary purpose of this notification is to advise you of my good faith interest in eventually repurchasing the home I had always   intended to keep in the family for generations to come.
Sincerely,
Spencer C. Young
Posted by Spencer C Young at 3:24 PM