The reality is that there was NEVER a default, only a fantastic proliferation of LIES and pernicious acts of FRAUD by Paragon Commercial Bank and Poyner & Spruill (the "Perpetrators") directed against the interests of Mr. Young – ergo the notion of proceeding with foreclosure sales of the subject collateral properties had no validity whatsoever, so the UNLAWFUL, UNCONTESTED and thoroughly BOGUS foreclosure sales were nothing more than FRAUDULENT CONVEYANCES.

Deceitful Practices
And it is clear the Perpetrators aggressively pursued accelerated court proceedings (including UNLAWFULLY delivering notices of foreclosure sales AFTER they were held) while UNLAWFULLY denying Mr. Young his fundamental right to legal due process, with GRAND LARCENY THEFT as their objective.

Theft of Residence
With regard to Mr. Young’s condominium residence (owned by one of Mr. Young’s limited liability companies, for tax purposes) he was left with no option but to have that entity file a Chapter 11 bankruptcy petition for relief, to which the Perpetrators immediately responded with a motion to dismiss, knowing they would continue to prevent his engaging legal counsel, and get his case dismissed, so they could steal the property even though the subject mortgage had been PAID-IN-FULL !! . . . and this is EXACTLY what happened. 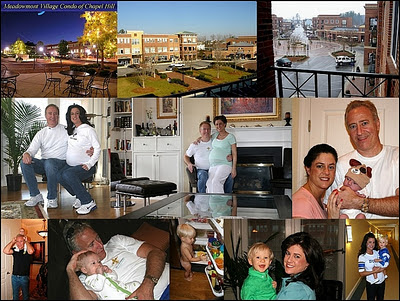 Corruption & Sabotage
After again being UNLAWFULLY prevented from engaging legal representation, Mr. Young called the Middle District Bankruptcy Court in Greensboro, and advised he would be filing a petition pro se, which would have stopped the fraudulent sale of October 29, 2009 (which he learned of on October 30).  This would have availed another couple months to engage legal counsel or otherwise alert the authorities to the audacious bank foreclosure fraud, but when he got into his car to do so on Nov. 9, 2009, (which was the deadline to stop the sale) his car was mysteriously rendered inoperable (see pictures below, including his toddler son, Jackson, whom he was caring for that day(1), and Court Clerk Reid Wilcox refused to accept the filing by fax to meet the deadline (with delivery of the originals the following day), nor accept payment the filing fee by credit card.  The level of corruption involved in this matter is beyond anyone imagination.
Something is Very Wrong Here
What is noteworthy is that Reid Wilcox was clearly involved in this instance of corruption, and has a son who is Jackson's age.  Yes, it appears North Carolina is one big kakistocracy over-run by corruption, and Reid Wilcox is yet another pathetic example.  Mr. Young has not seen his son Jackson since the fraudulent foreclosure eviction on Feb. 2, 2012, and yet Mr. Wilcox sees his son every day . . .  there is something VERY WRONG with this scenario.

Unintended Consequences
Importantly, Congress did NOT bail out Banks so they could defraud and persecute the taxpayers who bailed them out. Moreover, the corruption observed in this matter alone, suggests a threat to the integrity of the U.S. Justice System may exist.
______________
(1) This fact is relevant because Mr. Young's fiancee, Leah Krier was out of town on that day, and therefore Mr. Young's other car was not available, as it was parked somewhere at RDU airport.
Posted by Spencer C Young at 1:37 AM