How Can This Happen In America? The Worst Nightmare Imaginable . . .

During the UNLAWFUL incarceration of Spencer C. Young on entirely FABRICATED charges that were made up OUT OF THIN AIR (and later dismissed as such) by corrupt Durham North Carolina District Attorney Leon Stanback in an diabolical effort to cover-up the multiple FELONIES of North Carolina Judge David Q. LaBarre and his girlfriend (Leah R. Krier), he was denied access to computers and was also UNLAWFULLY denied legal counsel.

As a result, Mr. Young had to handwrite messages to be posted on-line or otherwise disseminated by email and/or regular mail through a private investigator (“PI”) he had hired. These handwritten messages were secretly handed off during visits by his private investigator, who would then upload these documents to this website and mail (electronic and/or regular) out copies to a variety of others, as directed, with the ultimate goal of securing Mr. Young his rightful freedom.

The Key Points of this transmital 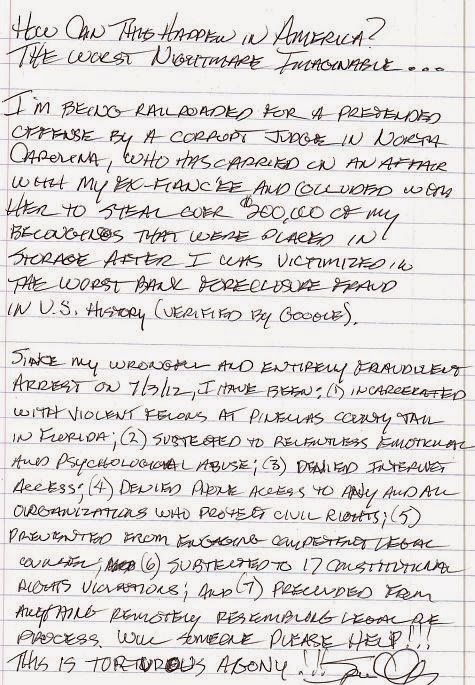 This transmittal was distributed to a wide audience, including public officials who  took oaths of office to preserve, defend and protect the US Constitution, and thus were obligated to intervene and stop this travesty of justice.   They knowingly and deliberately chose not to and are thus complicit in the long list of felonies these crimes were orchestrated to cover-up.  These officials are: