The Extradition of Spencer C. Young MUST Be Stopped Due to Perjury By Gov. Bev Perdue of North Carolina

The July 3, 2012 arrest of Spencer C. Young by a SWAT team of a dozen heavily armed U.S. Federal Marshals at his residence in Florida was based on a pretended offense in a desperate effort to cover up the extensive felonies of a corrupt North Carolina ("NC") judge (David Q. LaBarre) and others, the details of which were included in a criminal complaint filed THE DAY BEFORE with the Durham  Police Dept.

This unlawful retaliatory arrest was coordinated by Mr. LaBarre's long-time friend and colleague,  Leon Stanback, who is the acting District Attorney for Durham, NC.  Moreover, NC Governor Bev Perdue submitted a sworn statement for a meritless extradition from Florida to North Carolina which she knew to be a bold face lie, when she signed the fraudulent document.
The below correspondence was emailed and mailed to NC Gov. Perdue on October 12, 2012, putting her on notice to the perjury she had committed, and thus giving her an opportunity to rectify this woeful injustice by stopping the fraudulent contemplated extradition from Florida to North Carolina. [Subsequent clarifying update to this post:  NC Gov. Perdue affirmed her perjury and the extradition occurred a few weeks later.]
[Note: This transmittal was hand-written by Mr. Young from his Pinellas County (Florida) maximum security jail cell, which was then: (1) transcribed by the Florida private investigator he had hired, June Gustus, who (2) sent the email using Mr. Young's email account; and also (3) physically mailed the typed version of the document to Gov. Perdue's office.  Due to this cumbersome method of communication, there were typos in the transmittal.  Please note hyper-links to the referenced Exhibits are reflected at the bottom of this post.] 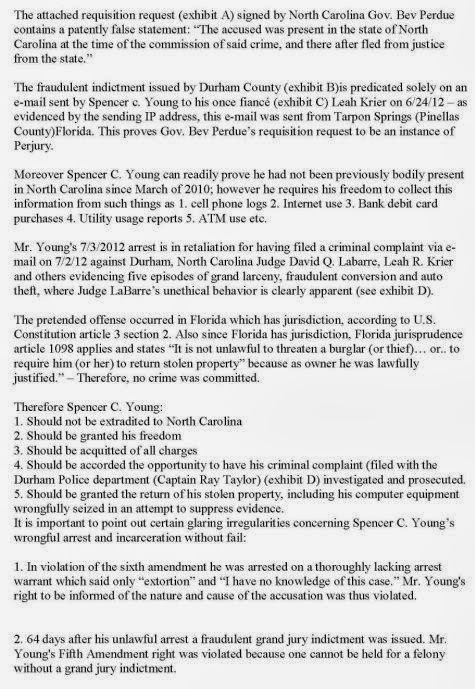 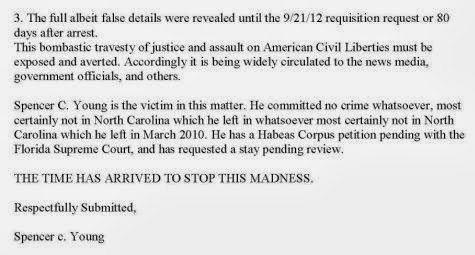