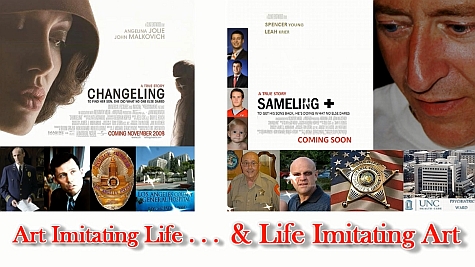 Yet as unbelievable as the Changeling story was, the SAME crimes were perpetrated in SAME manner 82 years later by the Orange County, North Carolina Sheriff's Dept. (OCS).  They were perpetrated against Spencer C. Young and his family -- PLUS the UNLAWFUL acts of the OCS were part of the final phase of The Worst Bank Foreclosure Fraud in U.S. History, which is a desperate and exceptionally UNLAWFUL effort to cover up the increasingly epic MorganStanleyGate scandal.  Accordingly, the crimes committed by the OCS have been coined:

A video documenting the Sameling + crimes has been produced, and has been filed at the Federal and State levels in a series of civil and criminal complaints against Orange County (NC) Sheriff Lindy Pendergrass, his right hand thug Major Charles Blackwood and others.  The complete video can be accessed below:

Note:  In the event you encounter difficulty in viewing this video, the slides from this video can be accessed via hyperlink below -- they are segregated into four parts:
Posted by Spencer C Young at 2:26 PM