My Unlawful Extradition Must Be Stopped . . . Or I Will Be Assassinated !

Durham County in North Carolina is rife with corruption, such that the notion of justice there is a pipe-dream.  I observed this municipal circus of illegitimacy with a ring-side seat in the Duke Men's Lacrosse Scandal, as my son Michael was on the team, and his best friend Collin Finnerty was one of the three wrongfully indicted players.  The plan is sadly commonplace and involves arranging "an accident" of some form (i.e., assassination) while incarcerated in North Carolina.  And in light of the other assassination attempts, and I would much rather be prudently alarmist and alive than dismissive and dead.

As a result, Mr. Young had to handwrite messages to be posted on-line or otherwise disseminated by email and/or regular mail through a private investigator (“PI”) he had hired. These handwritten messages were secretly handed off during visits by his private investigator, who would then upload these documents to this website and mail (electronic and/or regular) out copies to a variety of others, as directed, with the ultimate goal of securing Mr. Young his rightful freedom.  In some instances he had his PI type them up, as is the case with the document below, which was issued on Oct. 1, 2014 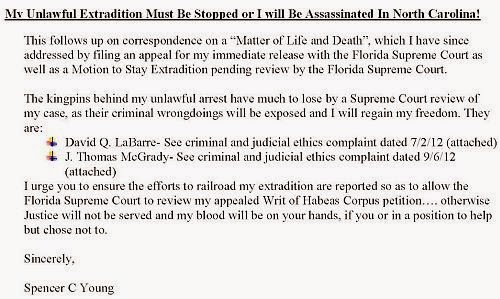 Hyperlinks to the documents referenced in the above transmittal:

The urgency and seriousness of this matter cannot be overstated and therefore it has been emailed to virtually EVERY person I know of, including the senior public officials in a position to intervene and help along with the vested authority to do so,in particular: