Bank Foreclosure Fraud - Exhibit I - Federal Officials Who Were Alerted

This post is associated with alerting the requisite Government Officials of what is arguably The Worst Bank Foreclosure Fraud in US History.


This particular post lists the Federal Officials who were separately provided extensive evidence on Jan. 29, 2010, just four days before the violent eviction by over a dozen SWAT Team deputy officers of the Orange County Sheriff on a mortgage that was:
This should scare the hell out of EVERY American citizen because many of these officials were contacted many months prior seeking protection from this egregious crime instigated by Paragon Commercial Bank and the law firm of Poyner & Spruill that undermines the very foundation of inalienable, civil, constitutional and  property rights upon which this country was founded.
Importantly, this dastardly act was carried out at the behest of Morgan Stanley in order to cover-up the MorganStanleyGate scandal, and was intended to culminate in Spencer C. Young's assassination, which he only narrowly averted.
Reflected below are the Senate Committees and Federal Officials who are being concurrently apprised of this assault on core American Citizens’ rights – the result of yet another intolerable affront on the American public by the U.S. Banking industry,  made possible by rampant corruption among local judicial staff and an astonishing number of attorneys.
U.S. Senate Committee on Banking, Housing & Urban Affairs
(Phone: 202-224-7391 / Fax: 202-224-5137) 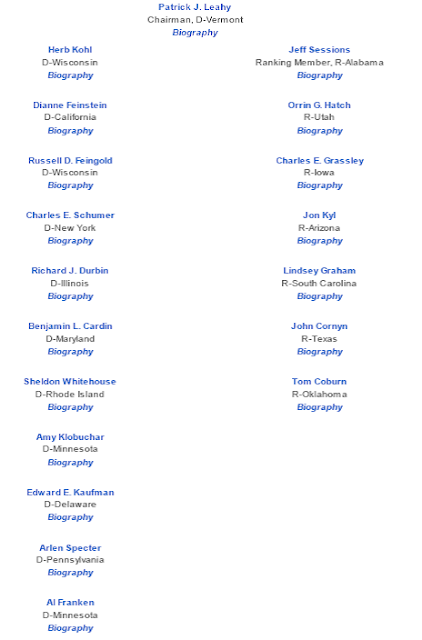 
(Phone:  (202) 622-2000    Fax: (202) 622-6415)
Sheila Bair – Chairman of the Federal Deposit Insurance Corporation
(Phone:  (877) 275-3342    Fax: (703) 812-1020)
Mary Schapiro – Head of the Securities & Exchange Commission
(Phone:  (202) 551-2100    Email: chairmanoffice@sec.gov
Robert Mueller –  Director of the Federal Bureau of Investigation
(Phone:  (202) 324-3000    Email: robert.mueller@ic.fbi.gov
Important note:  Most of the officials listed above have established bureaucracies effective at deflecting nonsensical ho-hum communications from the general public; however, they also end up frustrating and discouraging those who wish to alert them of legitimate issues that warrant their attention.  For example, the FDIC’s response to being alerted of this fraud could not have been more feckless and vapid, and although earlier requests were made to bring this to the attention of Sheila Bair, I received no indication this was ever done.

Robert Mueller and many other senior FBI officials have received dozens of communiqués evidencing a fraud of epic proportion was being perpetrated (where this indictment represents only the “tip of the iceberg”); however, the responses to date indicated Mr. Mueller has NEVER been advised of this – and the responses to date are best described as disturbing, nonresponsive and thoroughly disappointing.
And trying to alert Mr. Holder to the astonishing level of observed and painstakingly documented instances of corruption among judges and attorneys in the triangle region of North Carolina alone is a sure-fire exercise in futility.  I suggest you disguise your voice and call in yourself for a vexing run-around of a lifetime.  Although my IQ is measured to be in the top 1%, I don’t seem to be smart enough to figure this out – ergo, you NEED to change this.
Accordingly, an unorthodox and multifaceted approach has been undertaken to ensure you ALL know about this, and timely respond in a “YES WE CAN” manner.
[1] While the primary issues in this matter may viscerally appear  to be outside the purview of the Senate Finance Committee, the unlawful actions of Paragon Commercial Bank and Poyner & Spruill caused the loss of medical insurance coverage for Mr. Young’s entire family, hence reporting these misdeeds to this Committee is appropriate.
Posted by Spencer C Young at 12:03 AM