The excerpt below is Exhibit V to the Jan. 29, 2010 Notice sent to Senior officials for North Carolina and the Federal government on mortgages that were:


This instance of bank foreclosure fraud was carried out by Paragon Commercial Bank (with assistance provided by their attorneys, Poyner & Spruill) at the behest of Morgan Stanley (and their attorneys, Kirkland & Ellis) as a dastardly form of cover-up, so as to deprive Mr. Young of resources and undermine his professional and personal credibility, so he could not viably pursue his now massive claims in the MorganStanleyGate scandal. 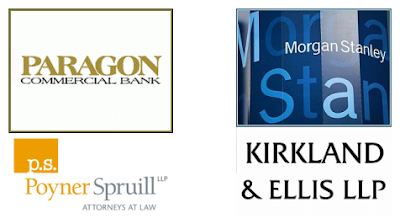 
Mr. Borden's experience in real estate lending was then, and continues to be dwarfed by Mr. Young's prodigious banking career experience, which includes $32 billion in commercial mortgage related transactions -- in fact, if you aggregated the transactions completed by every banker at Paragon throughout their careers, the sum total dollar amount of transactions would NOT come close to that done by  Mr. Young, considered one of the pioneers of the Commercial Mortgage Backed Securities ("CMBS") market.

And because of Mr. Young's deep background in finance, banking and real estate, Mr. Borden typically provided Paragon's then current lending parameters and financing terms, and Mr. Young would underwrite, price and size the loan that Paragon would then make.  All the financings Paragon completed for Mr. Young (four financings totaling $5.1 million on properties valued at $20 million), were effectively predicated on a hand-shake and this mutually acceptable and successfully practiced arrangement.

Moreover, as his personal banker since 2004, Mr. Borden gained Mr. Young's trust as a confidant, and was part of his real estate investment advisory team -- little did he know Martin Borden would abuse that trust in a profound and pernicious manner, as described herein.


To provide context to how devastating Martin Borden's betrayal was, consider the following:  In the classic, Inferno, 14th Century Italian Philosopher, Dante Alighieri believed Treachery (violating one's trust) and Fraud (in this case 20 separate elements of fraud) are considered to be sins more reprehensible than Violence such as Murder (see Figure 1) . . . this being the case because such transgressions can be unimaginably painful to a large number of people (as was eventually the case), typically go unpunished and are often replicated throughout the lifetimes of the perpetrators.

The Strategic Plans at a Critical Juncture


During the last quarter of 2007, Mr. Young discussed his business strategies and personal plans at length with Martin Borden, as he had to contend with, or otherwise prepare for numerous seminal events, including: 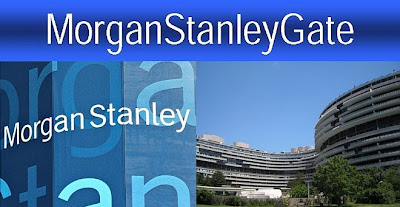 Everything Hinged On The Planned Recapitalization . . .


He also discussed at length the recapitalization of his North Carolina investment properties, which would yield substantial value accretion, and provide the liquidity to pursue the investigation and prosecution of  the aforementioned  anomalies, which ALL suddenly began in a seemingly orchestrated fashion during the Summer of 2007 -- this was NOT a coincidence, but rather an instrumental part of the MorganStanleyGate cover-up.

The recapitalization was to be done in three sequential phases, the first two being immediate:

Anyone conversant in commercial real estate lending would agree that the Recapitalization terms outlined above were not only sound from a credit standpoint, it was a readily doable transaction, or a "No-Brainer" in commercial real estate lending parlance -- an assessment with which Martin Borden agreed because the contemplated financing was WELL WITHIN Paragon's lending parameters.

It is also relevant to point out Paragon was NOT impacted by the sub-prime mortgage banking crisis that later emerged because Paragon did NOT make residential mortgage loans.


The Intent & Effects of the Recapitalization

As structured and agreed to by Martin Borden, the Recapitalization would establish a strong fiscal foundation for the foreseeable future, thereby comfortably ensuring Mr. Young's ability to financially provide for all his loved ones, as he had long been doing, for some for more than two decades. His loved ones included: Maria; his mother (Edna May Young); his sons (Michael, Kevin & Ryan Young), who were all attending college; and his fiancee' (Leah Krier), who was pregnant, and due to give birth in April 2008.


Since the outset of their banking relationship, Mr. Young had waxed eloquent to Mr. Borden about the importance of establishing a strong fiscal foundation for his commercial real estate investments in North Carolina to enable him to pursue his mounting civil claims in the MorganStanleyGate scandal.

When Mr. Young was going through his divorce, he involved Mr. Borden in the negotiations of his Divorce Settlement Agreement ("DSA"), and providing him a final executed copy of it when completed (see Figure 2 below).  Every banker knows that contentious divorce can be disruptive to a borrower's financial stability, and an amicable settlement often ameliorates any deterioration in the creditworthiness of the borrower.  Unsurprisingly, Mr. Borden vowed his complete cooperation.

Mr. Young kept Mr. Borden apprised of the key financial provisions of the DSA throughout the negotiations to ensure what was ultimately agreed upon were acceptable to Paragon -- this being the case because certain provisions were entirely predicated on Paragon financing.  In other words, Mr. Young would not agree to any provision unless Mr. Borden provided assurances that Paragon would deliver.

Importantly, throughout their banking relationship, Mr. Borden had always made good on his commitments, so there was no reason to doubt his integrity here -- in fact just days earlier, he had made good on financing Mr. Young's critically important acquisition of land parcels to be used for stacked valet parking at The Courtyard of Chapel Hill (discussed below in the next section).

Concurrent with successfully arriving at an amicable divorce settlement, Mr. Young also acquired two adjacent real estate parcels on Graham St. in Chapel Hill (see Figure 3 below).
The acquisition of these land parcels:
And this is why Paragon financed 100% of the purchase price (see Figure 4 below) of this strategically important acquisition on January 25, 2008 . . . five days prior to finalizing the DSA.

Paragon's Fraud Is Obvious And Decidedly Malicious
Shortly after completing the acquisition of the Graham St. parcels, a SIGNIFICANT change in Mr. Borden's behavior was evident and well documented in the below documents (Figures 5 through 9), leading to Paragon dragging out a decision for nearly 4 months, when it had made prior credit decision within a few days, eventually reneging on phases #2 (Line of Credit) and #3 (Earn-Out Loan) of the agreed-upon recapitalization.

As a result of Martin Borden's obvious fraud and orchestrated betrayal, he and therefore Paragon DELIBERATELY:

Should Martin Borden Be Put To Death ? NO !!
Martin Borden of Paragon Commercial Bank has empirically proven WHY, according to Dante Alighieri, he should be subjected to capital punishment -- however, this is not 14th Century Italy, and we are NOT barbarians.

Notwithstanding, the manner in which he and his partners in crime at Paragon Commercial Bank (notably Bob Hatley, Matt Davis and Jim Hoose) and Poyner & Spruill (in particular, David Warren and Dan Cahill) are going to be publicly prosecuted to the fullest extent of the law, they will wish they had.

These men really are the absolute scum of the earth, and according to Dante, unimaginable suffering and eternal damnation awaits them . . . let's hope his interpretation of Hell is accurate